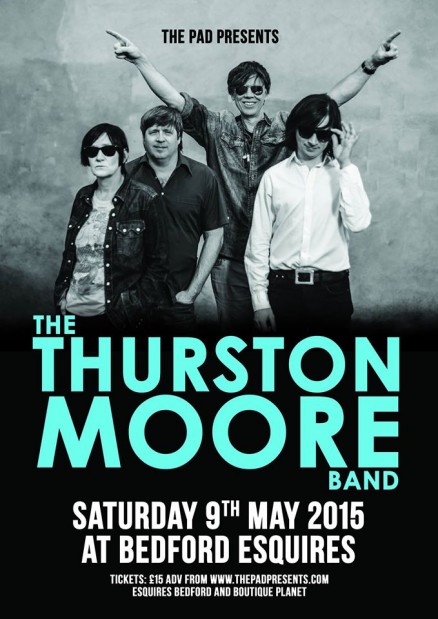 We are incredibly excited to announce that we will be putting on a show with Sonic Youth main man Thurston Moore on Saturday 9th May!

In 1976, aged 18, Thurston Moore moved to NYC to play punk music, and started up a little band called Sonic Youth in 1980. Best known as the band’s founder, singer, songwriter and guitarist, he also infiltrated the music scene through his writing, editing the music and literary fanzines KILLER, Sonic Death, and Ecstatic Peace Poetry Journal. His own writings have been published through various imprints.

Through his career Thurston has worked collaboratively with Yoko Ono, Merce Cunningham, Cecil Taylor, Rhys Chatham, Lydia Lunch, John Zorn, Takehisa Kosugi and Glenn Branca. He has composed music for films by Olivier Assayas, Gus Van Sant, and Allison Anders. He presently records and tours both solo, with various ensembles and with his own band. October 2014.

Thurston Moore’s latest album ‘The Best Day’ released last October is being hailed as one of the best works of his career, and for his Bedford date, he’ll be playing accompanied by his full band featuring Debbie Googe [My Bloody Valentine], Steve Shelley [Sonic Youth] and James Sewards [Nøught]. ————————-

Tickets are on sale now priced £15 online from: www.thepadpresents.com & www.wegottickets.com Or person with no booking fee from: Danny’s bar @ Esquires and Planet Boutique in Bedford and Marios Hair Design in Kempston.

Free aftershow party with your ticket – At The Pad Nightclub