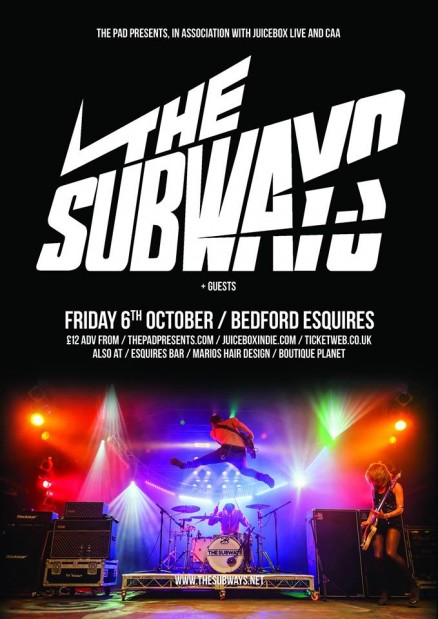 The Pad Presents are teaming up with our good friends over at Juicebox Live to bring you a very intimate warm up show from The Subways!

THE SUBWAYS are truly one of the most exciting live bands on the current touring circuit, thrilling crowds with their high-octane, explosive rock sound and wild stage performances. Firm European summer festival favorites, they have graced the main stages of over 100 international festivals across 20 countries. Through stage diving, circle pits and crowd surfing, the band are known to lead their fans in orchestrated mayhem as they crash through their thoroughly entertaining set.
Back in 2005, with an average age of just 17, Billy, Charlotte and Josh crashed onto the international music scene with their, now cult, debut, gold selling album ‘Young For Eternity’ and rock-club floor filler ‘Rock & Roll Queen’. (Watch a live video with 75,000+ people HERE). The NME proclaimed them “The sexiest thing to sweep rock n roll off it’s feet in years!”. Their sophomore album, ‘All Or Nothing’ (2008), was recorded in LA with Nirvana/ Smashing Pumpkins producer Butch Vig and is “Buoyed with emotional heft and supernova guitar riffs, wired around a maturing song craft” (MOJO). The tracks written around the time Billy was battling to save his voice by undergoing surgery to remove polyps from his vocal chords. The ‘Money And Celebrity’ album followed in 2011 with the band working with Blur/Smiths producer Stephen Street on this insanely catchy pop-rock record full of “brilliantly anarchic punk-pop vignettes; each being a big musical finger that sticks it to financial greed, the mediocre mainstream and the fame fetishists” (ROCKSOUND)… such as lead single ‘We Don’t Need Money To Have A Good Time’. (Watch the single video HERE)

Billy Lunn, the band’s lead singer and guitarist notes the new self- titled 4th album is “100% The Subways, it’s all us, we wrote, produced, and mixed the album ourselves.

“ The record has been described as “Near-perfect, punk-spirited noise” (KERRANG!)

“On Par with the best things they have ever written… and finds the band energized, focused and battle-ready” (Q MAGAZINE).

Full support line up to be announced. Tickets are £12 advance online on sale 10am Monday 21st August and locally from the 23rd August. THIS IS A 14+ AGES SHOW – Under 16s to be accompanied by an adult ————- www.thepadpresents.com www.juiceboxindie.com