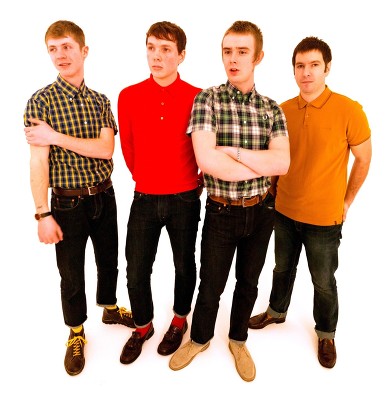 The Spitfires are a bold and brash band who were raised on The Clash, The Jam, The Specials, The Smiths and Arctic Monkeys.  Formed in September 2012 by Billy Sullivan (vocals, guitar) who recruited Sam Long (bass) and Matt Johnson (drums) to the cause. The band spent their first two years as a trio before augmenting their sound with the addition of Chris Chanell (keyboard, vocals).

Their critically acclaimed debut album ‘Response’ was released in August on their own ‘Catch 22’ record label which hit the Independent and Vinyl Charts at Number 6 and the UK Album Chart at Number 63. It’s picked up fantastic reviews across the board online and in print.

Their energetic and powerful live performances have already seen them play over 200 shows and with their growing fan base and reputation it’s no surprise that the band came to the attention of Paul Weller and The Specials who both personally invited them along for support slots in recent months.

The band have also been part of advertising campaigns for clothing companies including internationally renowned brands like Merc, Baracuta and Dr Martens and have already racked up radio support at BBC6 Music, Amazing Radio, BBC Introducing and a host of other digital stations.

Heading to Bedford Esquires for the first time as part of their UK ‘Take Action! Tour’ special guests are tbc and a guest DJ will compliment the bill.  The current European tour has already seen the first leg sold out and finishes with the band’s biggest headline to date at 229 Club in London in December.

Doors open at 8pm – Tickets are £8 in advance and can be bought in person (booking fee free) from Esquires Bar at the venue, Boutique Planet in the Arcade and Marios Hair Design in Kempston.. Tickets are also available from Vinyl Revelations in Luton and can be bought online from seetickets.com

“A statement of intent from the disenfranchised British youth. It’s brimming with passion.” – The London Economic