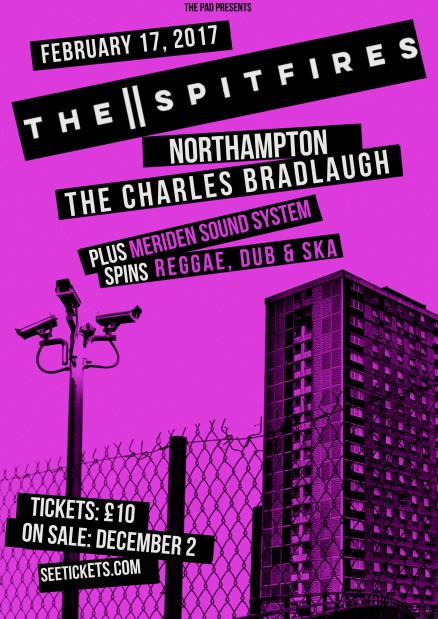 *CHANGE OF VENUE* – PLEASE NOTE DUE TO HIGH DEMAND OF TICKETS WE HAVE MOVED THE SHOW FROM THE CHARLES BRADLAUGH TO THE PICTUREDROME, WE HAVE JUST RELEASED ANOTHER BATCH OF TICKETS AS A RESULT, PICK THEM UP FROM SPIRAL ARCHIVE RECORDS, THE PICTUREDROME & AND ONLINE AT SEETICKETS

The Spitfires are a 4 piece band from Watford. Their work ethic, powerful songs mixed with social commentary and lack of industry support has made this fiercely independent band one of the most popular and vital underground bands in the UK today. This attitude has earnt them a dedicated following and sold out shows across the UK and abroad. Following up the critically acclaimed debut ‘Response’ which saw the band enter high in the UK Album Charts and reach Number 6 in both the independent and vinyl charts – The Spitfires return with their much anticipated second album ‘A Thousand Times’ out August 26th on Catch 22 Records.

The 11 tracks on ‘A Thousand Times’ reflect a sharper, wider vision and a more honed song craft than previously seen. The first single ‘So Long’ was a taste of things to come, reaching number one in the UK Vinyl chart. The classic pop theme is carried into the title track and the stunning ‘On My Mind’ with its anthemic chorus and soaring melodies. Tracks like ‘Day to Day’ and ‘Return To Me’ show a natural progression in style and with its cinematic soundscape, whilst the thrilling ‘I Don’t Even Know Myself’ shows influences of Dub, Reggae and Ska. All hinting at bigger things (and venues) to come. The band return to Northampton after playing to a packed room at the Roadmender earlier this year to make their debut at the THE PICTUREDROME

Taking influences from The Clash, Billy Bragg, The Jam through to Soul, Reggae and Ska – the band have released 2 albums since 2015.  ‘A Thousand Times’ was the follow-up to the critically acclaimed debut ‘Response’ which saw the band enter high in the UK Album Charts and reach #6 in both the independent and vinyl charts, with the single ‘So Long’ charting at #1 in UK Vinyl Singles Chart.  Their work ethic and powerful song-writing mixed with their acute social commentary and lack of mainstream industry support has made this fiercely independent band one of the most popular underground success stories in the UK today. This DIY attitude and independent spirit has earned them a dedicated following and sold out shows across the whole of the UK and Europe.

Special guest support from Greasy Diablos and the band will be bring their own DJ support the Meridian Sound System spinning the best in Reggae, Dub & Ska. Tickets are on sale via Seetickets from 9am from the 2nd December, local ticket outlets t.b.c – *Please note this event is 18+ no refunds will be given for incorrectly booked tickets*

“Welcome to the new sound of British rock” – Uber Rock