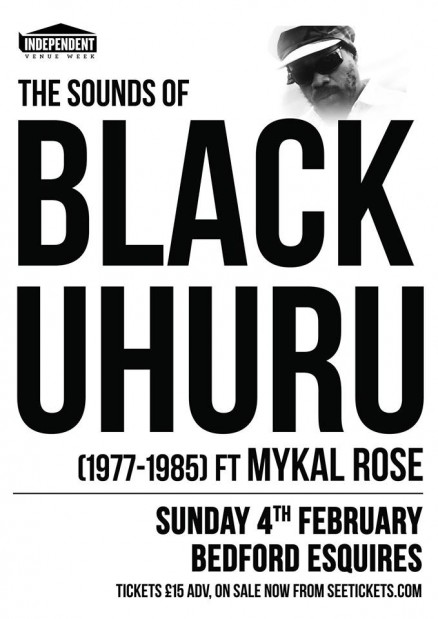 The legendary ‘Black Uhuru’ is one of the most successful reggae groups to ever come out of Jamaica. They’re the first Reggae band to win a Grammy in 1984 for the album ‘Anthem’.
Signed to Island records, they produced 7 hit albums which included the classics ‘Shine Eye Gal’, ‘Guess Who’s Coming to Dinner’, ‘Sponji Reggae’, ‘Sensimilla’ & ‘What is Life?’
The all star cast; comprised of front man and lead singer, ‘Mykal Rose’, band leader and backing vocals, ‘Duckie Simpson’, ‘Puma’ and riddim twins, ‘Sly & Robbie’, toured the world supporting acts like The Police and The Rolling Stones.

In 1985 Mykal left the band, shortly followed by Sly & Robbie and since then the band has never reached any such heights.

This UK tour represents the very best of Black Uhuru’s finest moments. With Mykal Rose back as the leading frontman, he will deliver non-stop hits from their most popular period, 1977 – 1985.

He will be backed by the UK’s best backing band, Mafia & Fluxy, who are also celebrating 30 years in the music business.If you are a true Reggae fan, then this is a show not to be missed!