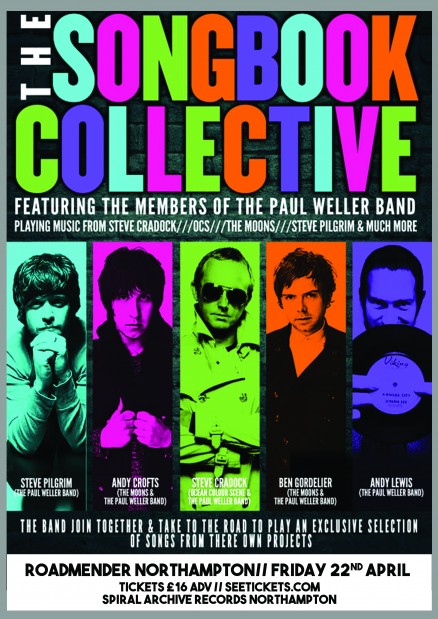 THE SONGBOOK COLLECTIVE
Featuring the members of the Paul Weller Band
STEVE CRADOCK (Ocean Colour Scene)
ANDY LEWIS (Blow Up)
ANDY CROFTS (The Moons)
STEVE PILGRIM (The Moons)
BEN GORDELIER (The Moons)
Friday 22nd April @ The Roadmender Northampton
Five top calibre musicians that have travelled the world playing in front of hundreds of thousands of people, performing on TV and numerous number 1 albums. These brothers in sound are the loyal musical backbone for Paul Weller.…Steve Cradock joined the Paul Weller Band 20 years ago and has played guitar on every album since “Wildwood”. Starting out in Ocean Colour Scene who have released 21 albums, two of which have reached number 1 in the UK charts. Steve has also recently joined The Specials as guitarist and has released three acclaimed solo albums over the last 7 years.Andy Crofts is the singer / songwriter of The Moons. The band have released four albums. Andy joined the Paul Weller Band in 2008 and has played on the last three Paul Weller albums.
Steve Pilgrim has played with The Stands and Cast and has been in the Paul Weller band for the past 7 years.Andy Lewis is the bass player in the Paul Weller Band. His single “Are you trying to be Lonely?” from 2007 featured Paul Weller on vocals. Andy was one of the founding DJ’s at the legendary Brit Pop club night Blow Up which was a massive night both in London and right here at Esquires in the mid 90s.Ben Gordelier joined the Paul Weller band in 2012 and has appeared on the last two Paul Weller albums. He is also the drummer with The Moons.The band join together and take to the road for a few select UK dates to play an exclusive selection of songs from their own projects playing the music of Steve Craddock, The Moons, Ocean Colour Scene, Andy Lewis, Steve Pilgrim and much more…Special guest support for the evening tbc with a guest DJ from Andy Lewis (Blow Up) between the bands and a possible aftershow party

Tickets are on sale now priced £16 online from Seetickets: