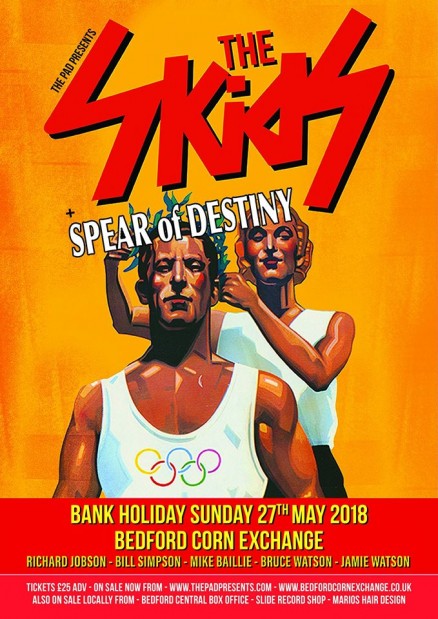 The Skids + Spear of Destiny

THE SKIDS + Spear of Destiny

Following up the ‘buzz’….

“Memories fade, but some linger for a reason. The Skids was the definitive part of my early life. A brilliant adventure into the world of creativity and adulthood”, reflected Richard Jobson prior to the bands’ first tour in almost 40 years. “Taking these memories and replanting them into 2017 has not been easy. How do you do it? How should it sound? Are we little more than a heritage band? These were the questions rattling around my head as I tried to find a way to celebrate the bands 40th anniversary. The answers ended up being very simple – Don’t over think it – Just do it. Enjoy every minute of it. Play the songs like it might be the last time. Give it everything. And then…….there’s the new stuff!!! The beginning of something new rather than the end of something old.”

And so it was. With a new album recorded and ready to go , the response to the bands gigs has been phenomenal:

“The buzz generated by the return of the Skids to the nationwide tour circuit has created enough electricity to power a small town. An immense, stunning performance -the same as every date on this tour it seems”. (Ged Babey, Louder Than War)

SOMETHING OLD… The Skids formed in 1977 in their home town of Dunfermline, Scotland by Richard Jobson, Stuart Adamson, Bill Simpson & Tom Kellichan. After releasing an independent single the band were played by John Peel, supported The Clash in concert and then were signed to Virgin Records in 1978. Their first singles were ‘Sweet Surburbia’, ‘The Saints are Coming’ and ‘Into the Valley’ – the latter reaching the UK Top Ten in early 1979.

Their seminal debut album ‘Scared to Dance’; came out in 1979 and was quickly followed by two chart singles – ‘Masquerade’ and ‘Working for the Yankee Dollar’. Both singles were taken from the Bill Nelson (Be Bop Deluxe) produced second album ‘Days in Europa’. The album also featured new member Rusty Egan of Rich Kids & Visage fame after the departure of Tom Kellichan. The band released two more albums ‘The Absolute Game’ (1980) and ‘Joy’ (1981) before splitting. Stuart Adamson went on to have worldwide success with his new band Big Country.

Skids briefly reformed in 2007 to celebrate the band’s 30th Anniversary with concerts in their native Scotland at T in the Park and in their hometown of Dunfermline.

Very special guest for the evening performing together as a one-off are Spear of Destiny.  Following a busy 2017, cult post punk band Theatre of Hate front man the legendary Kirk Brandon revives his other timeless moniker Spear of Destiny for 2018.  With 13 albums to their name and vast collection of classic tracks SOD never stand still  and are looking to release new material in 2018 – some of which of which will feature in their live sets.   Recent shows have included classic tracks such as  ‘Young Men’, ‘Titanium Man’, ‘Come Back’, ‘Grapes of Wrath’, ‘The Wheel’, ‘Liberator’, ‘Land of Shame’, ’Rainmaker’, ‘Pumpkin Man’ and the anthemic ‘Never Take Me Alive’ as well some of the newer tracks due to surface on the next record.

As very special guests Spear of Destiny will be playing a full set and will take to the stage at 7.30pm sharp with the doors now opening 30 minutes earlier than originally advertised.

Tickets priced £27.50 are on sale now via Seetickets, they can be picked up booking fee free in person from Slide Record store in the Arcade & Mario’s Hair Design in Kempston and can also be booked through the Corn Exchange website and in person from the Box Office from Monday 30th October