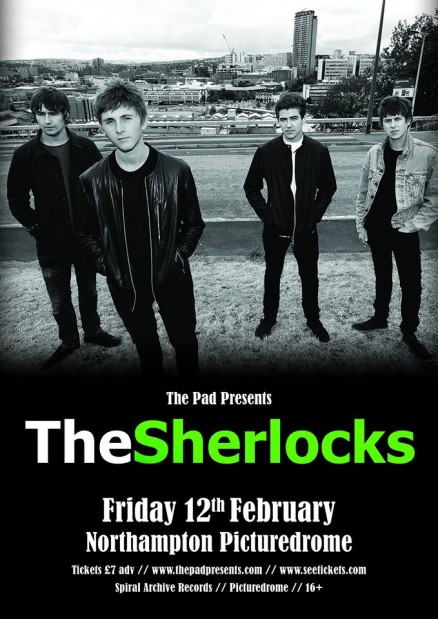 If The Sherlocks were a cake, the main three ingredients to make this band would be Arctic Monkeys, The Jam & The Libertines.

Having performed in excess of 500 gigs up and down the country, Sheffeild 4 piece The Sherlocks, roll into Northampton with a show at the Picturedrome Northampton on Friday 12th February.

The band have just headlined the legendary Koko, and recently played with Reverend and the Makers, The Enemy and Cast among others. The Sherlocks were a huge hit across the big festivals in 2015, including Isle Of Wight, Tramlines, Y-Not and the Mosborough Music Festival and played a packed tent at Reading. In 2016 they are also special guests of The Libertines when the hit the arenas in the early part of the year.

Having wrote and produced a full set of original songs, their music is often described as ‘upbeat‘ and ‘bodacious’, with ‘thrashing vocals’ and ‘rhythmic guitars’. As a result of regularly being ‘on the road’ and relentlessly performing at venues and festivals, the band have done it the hard way and are now armed with a huge arsenal of anthemic tunes and an even bigger army of faithful fans known as the The Sherlock’s Army.

The Sherlocks are coming out to deliver the biggest, wildest tour to kick start 2016 with very special guest to be confirmed, those in the know The Sherlocks gigs sell out rapidly so grab your tickets, quick!