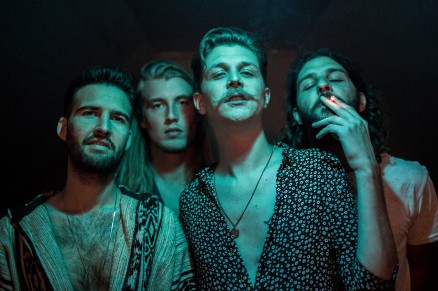 We are very pleased to announce that we will be putting on the headline home town show for one of the area’s finest bands, The Scruff.
We have some very special guests for this show, with former Catfish & The Bottlemen guitarist Billy Bibby coming along his new band The Wry Smiles as main support, and a great new band causing a stir of their own, Sarpa Salpa opening up the show!
The Scruff are a band back in the saddle after a somewhat turbulent year that has seen some major changes, both in life and as a band. The Bedford natives have seen a member emigrate, a rebuilding process and a new outlook on their sound fuelled by the passing of a beautiful soul that inspired their latest single ‘Her’.

The single is the bands most personal work to date, not only an ode to those who never had the time to say goodbye, but also to all the important women who help nurture and shape our lives. While previous release ‘Leave it Alone’ captured the boisterous guitar-fronted alt-pop that their live shows deliver, bandmates Adam, Jack, Omar and Sam, have taken on a far more ambitious project with this next single, an anthemic, uplifting, stadium rousing track that will resonate with anyone who loves and has lost.

Since the band drafted in new lead guitarist Jack, The Scruff have been writing and crafting their sound and their skills, with a brand new set, and a whole heap of new tracks recorded, ready to unleash on an unsuspecting public.

This will be the bands only Bedford show for the forseeable future, come and see what they’ve been cooking!

Tickets are £6 advance, on sale now from SeeticketsTickets are available from Friday 15th September from:

Free after show party to be announced!