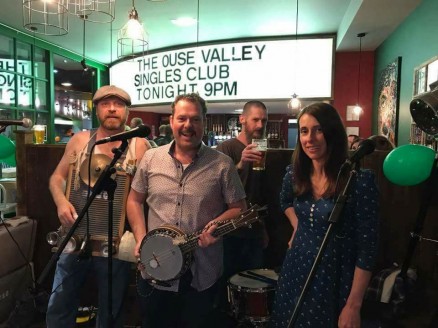 On Friday 15th September THE OUSE VALLEY SINGLES CLUB return to Bedford Esquires for another headline show on the main stage.

Back in September 2016 the band took on the task of headlining the main stage not only selling it out a couple of weeks in advance but creating a huge demand to get them back for all that missed out. Roll forward to January 17 than band added their annual first gig of the year at Esquires Holy Moly’s only for the band to have to upgrade to the main stage again selling out the venue again.

Following on from a run of summer festival around the UK and the Fens of course the band return indoors to start the autumn gig season.

If you have yet to catch The Ouse Valley Singles Club you are in for a special treat ’Heavily influenced by the sounds & traditions of 1950’s Skiffle The OVSC combine this with the energy of Punk, Rub n Dub Roots Reggae and the swing of Rock and Roll. They then layer this with hilarious storytelling and what you get is an energetic performance that’s topped with a truly original & likeable sound that’s being called ‘New Wave Skiffle!’ They give a hysterical insight into everyday life with tales of woe and razor sharp observational commentary whilst simultaneously rocking the crowd.

They supported luminaries such as Chas and Dave on their 2014/15 tour and warmed up for Bob Geldof and The Boomtown Rats at the Great British Alternative Music Weekender as well as playing at Festivals such as Boomtown, Bestival, Nozstock and Rhythmtree.

This is the only Bedford show The Ouse Valley Singles Club will be playing this year.

Tickets priced £8 are on sale via seetickets and are available from the regular ticket outlets of Esquires Bar, Planet Boutique in Bedford and Marios Hair in Kempston (booking fee free)