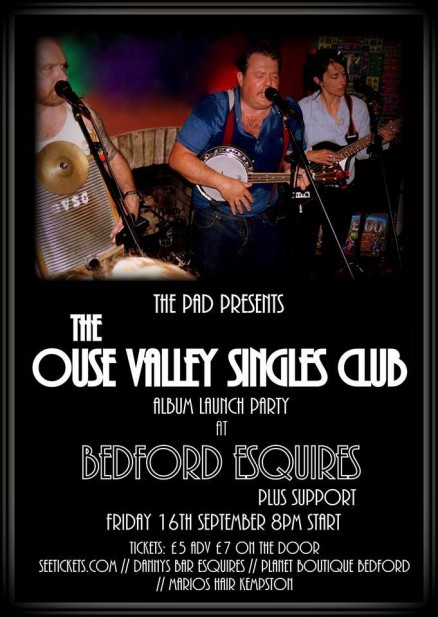 Riding on the success of their internet smash hit ‘Girl from The Fens and currently blazing a trail across East Anglia to the Midlands, Bedford’s favourite Comedy Skiffle Band are coming to Esquires for a very special ‘one off’ Bedford show to launch their New Album. Recorded locally at Lostboys Studio’s This is The OVSC’s 4th Album to date and follows on from their 2014 critically acclaimed album ‘Steve’ that gave you the Internet Smash Hits and gig favourites ‘F*kit List’ and “Central Heating Skank” this promises even more classics!

If you have yet to catch The Ouse Valley Singles Club you are in for a special treat. This will be the only chance you will get to see The OVSC playing Bedford Town Centre this year and it’s their first Headline gig on Esquires main Stage with support from some very special guests and it promises to be a big one so don’t miss it!  ’Heavily influenced by the sounds & traditions of 1950’s Skiffle The OVSC combine this with the energy of Punk, Rub n Dub Roots Reggae and the swing of Rock and Roll. They then layer this with hilarious storytelling and what you get is an energetic performance that’s topped with a truly original & likeable sound that’s being called ‘New Wave Skiffle!’ They give a hysterical insight into everyday life with tales of woe and razor sharp observational commentary whilst simultaneously rocking the crowd. They supported luminaries such as Chas and Dave on their 2014/15 tour and warmed up for Bob Geldof and The Boomtown Rats at the Great British Alternative Music Weekender as well as playing at Festivals such as Boomtown, Bestival, Nozstock and Rhythmtree. This is the only Bedford indoor show The Ouse Valley Singles Club are playing this year.

Tickets priced £5 are on sale via seetickets now and soon to be available from the regular outlets of Esquires Bar, Planet Boutique in Bedford and Marios Hair in Kempston.