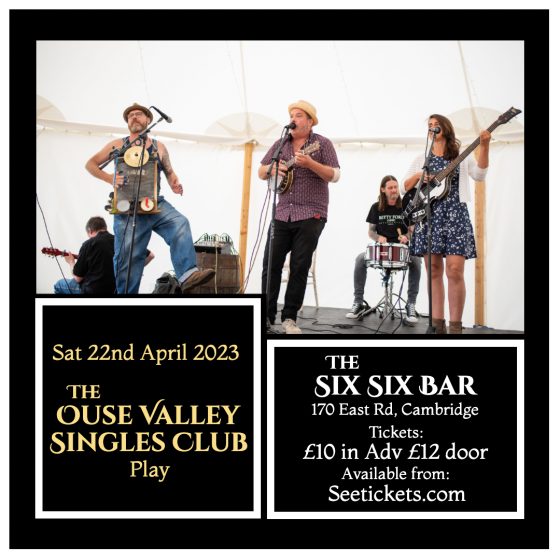 The Ouse Valley Singles Club
‘The Return to Cambridge’
7pm Sat 22nd April – The Six Six Bar – 170 East Road, Cambridge
Keeping up traditions of years gone by The Ouse Valley Singles Club make a welcome return to the City of Cambridge after an absence of nearly 4 years since a headline show this time playing the hottest new venue in town The Six Six Bar. (Some older folks will remember the venue in days gone by as The Boat Race)

‘The scourge of the Metropolitan Liberal Elite’ The OVSC put on a show that gives a hysterical observational account of everyday tales of woe with a razor-sharp observational narrative whilst rocking the crowds with their infectious ear-worms.

Highlights of their musical journey came when they supported luminaries Chas and Dave on their 2014 tour, warmed up for Sir Bob Geldolf and The Boomtown Rats in the main arena at the Great British Alternative Music Weekender at Butlin’s Skegness as well as providing warm up for the likes of Pete Docherty, The Wonderstuff and the poetical musical comedy genius KATG. Clearly illustrating their flexibility and appeal to audiences of all ages and musical backgrounds going down a storm and building their following at every gig they play.

Tickets are on sale now from Seetickets priced £10, doors open at 7pm with the first set kicking off at 7.45pm