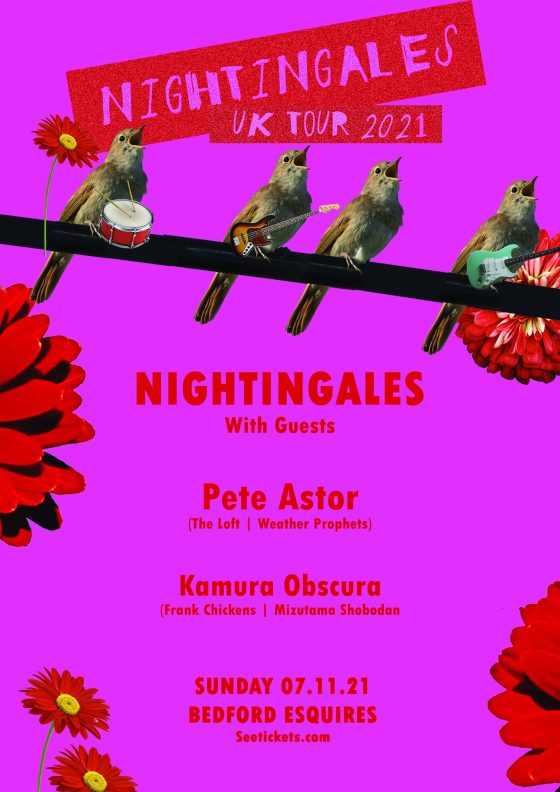 This show is rescheduled from Sunday 19th April and Sun 22nd November 2020 and 6 May 2021, all tickets from the original dates remain valid

It’s unusual for an act to hit its peak after four decades. Yet here it is.

Commercial Suicide Man, their 7” Vic Godard collaboration, was released as the group entered the studio to record their ninth full-length album. While the single sold out almost immediately, got picked as BBC 6’s Single of the Week, and received more airplay than any Nightingales record to date, it won’t have prepared fans for the most ambitious album in the band’s catalogue.

The band’s climb to become Britain’s most dazzling live band – shows are played at full energy without the breaks lesser combos need to breathe, drink or chatter – was unexpected, and public awakening to their humour, skill and brilliance demands revision of post-punk history. The Nightingales emerge as the industrious ant to their peers’ workshy grasshopper personae, appearing victoriously at the finish line to puzzled realisations that they’d ever even been in the race.

The Nightingales have notoriously had a new label for each new album, a fact which might reasonably call for consumer caution, but they are part of nothing resembling a ‘scene’, they speak their own musical language, and while they bust out slogans about being “slightly superior to others of their ilk” . . . the fact is, they have no ilk. One label head proudly claims his rationale for the release of one of their albums as nothing less than “a public service.”

Some of The Nightingales’ historic lack of acclaim stems from a density of ideas, which the band see no need to mine for profit. Album closer It Is milks Sister Ray dissonance over a Krautrock groove, with Robert’s vocals calling to mind the last gasps of a drowning man while Fliss turns the tune on its head with voice recalling Nancy Sinatra on Some Velvet Morning. But this description’s a crude approximation of small aspects of a whole which sounds utterly unlike any of those, and breathtaking though it is, odds are they’ll never record anything like it again, but the same could be said for the rest of the album.

Faust’s Hans-Joachim Irmler adds keyboards and The Lovely Eggs’ Holly Blackwell’s languid voice features on one song, but the album’s real shock is that the band has now gelled to an unspoken, nearly psychic interplay. Captain Beefheart, one of Robert Lloyd’s musical heroes, is best known for the difficult-but-classic Trout Mask Replica, and like that album, this one contains nary a ‘hit’, yet here every song sticks in the brain and grooves . . . outclassing Beefheart’s masterpiece by virtue of its effortless charm.

John Peel noted, “Their performances will serve to confirm their excellence when we are far enough distanced from the 1980s to look at the period rationally and other, infinitely better known, bands stand revealed as charlatans.” It’s doubtful he would have bothered with such a pre-emptive defence if he’d been able to witness the explosive growth of the band during their second incarnation.

Both You Don’t Know What You’re Doing and Chaff both channel Television until going somewhere Verlaine and company wouldn’t have conceived, the number of ideas contained within Enemy Of Promise could readily bolster an album by any decent group, before Chaff comes up with half-a-dozen more. And while your mileage may vary, those may even be the lesser tunes on the album.

Perish The Thought will be promoted by a far-flung tour, from Scotland to Serbia, with some dates already sold out. Guest supports include Stewart Lee, The Wolfhounds and Near Jazz Experience. Several videos from the album will appear in coming months, and a Marc Riley 6music session will take place in October.

The album has been pressed on 180g heavyweight vinyl, with a gatefold sleeve, specially-commissioned artwork by the wonderful David Yates, with a download card (the album is also available on CD) . . . but they haven’t bothered to stick their name on the front cover.