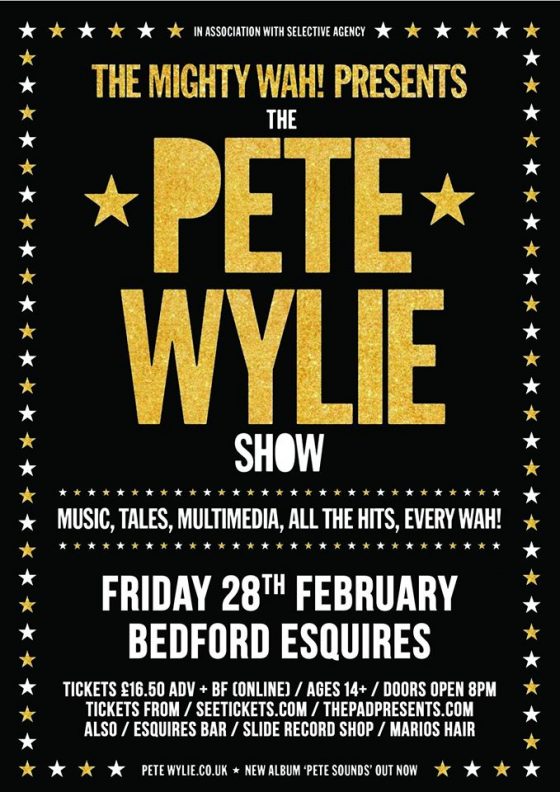 It is with great sadness that we have had to postpone the shows in Bedford and Worthing this weekend due to Pete being too ill to perform.

Pete Wylie is a seminal Scouse maverick who, along with Ian McCulloch and Julian Cope, pioneered the Eighties art-indie scene. His debut gig was at the legendary Eric’s in Liverpool – the night it was raided and closed for ever.

He bounced back with a series of bands – Wah! Heat, Wah! and The Mighty Wah! – and had a string of hits includes The Story Of The Blues (SINGLE OF THE YEAR – John Peel), Come Back, Sinful, 7 Minutes to Midnight and Heart As Big As Liverpool (an anthem forever linked with the Hillsborough Justice Campaign).

These tracks confirm him as one of the finest songwriters of his generation.

He has written scores for Hurricane Films, Alex Cox and Radio 4. Staggeringly articulate, funny and wise, his TV and radio appearances include The Culture Show, BBC 4’s Pop On Trial, and any number of BBC Radio documentaries. This year ‘Pete Sounds’ was released his first album in 17 years.

This is a 14+ ages show, under 16s to be accompanied by an adult<FMUC