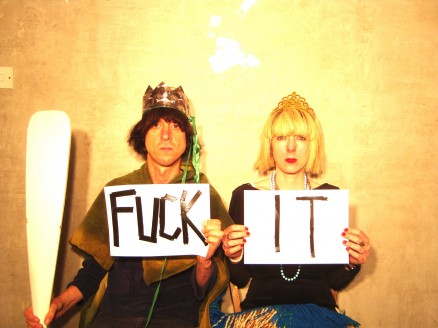 “One of the country’s most beloved underground bands”- NME

“You won’t hear another band like this anywhere between now and the end of the Millennium. The Lovely Eggs are just brilliant!”- Huw Stephens, Radio One

The Lovely Eggs are an underground surreal-psych punk rock duo from northern England.
They have a fierce ethos that music should have no rules.

For Holly and David being in a band is a way of life. True to this, they live the way they play. Fiercely, constantly in search of the good times.

With 8/10 thumbs up from the NME and much support from BBC 6 Music and Radio One the band continues to sell out gigs across the UK without the help of management, booking agent or record label support.

With S EVEN BBC 6 music sessions under their belt, as well as sessions for Radio One and XFM, The Lovely Eggs have enjoyed huge support from BBC 6 Music. Marc Riley declared their last THREE singles “ I Shouldn’t Have Said That”, “Drug Braggin” and ”Goofing Around (in Lancashire)” his official top tracks of 2015, 2016 and 2017 with the band also attracting airplay from DJs Huw Stephens, Steve Lamacq, Lauren Laverne, Chris Hawkins, Gideon Coe, Shaun Keavney, Radcliffe and Maconie and Jarvis Cocker.

Their songs have been produced by Gruff Rhys (Super Furry Animals), remixed by Tjinder Singh (Cornershop) and sampled by Zane Lowe for Scroobius Pip. With releases in the UK, Europe, USA and Japan, The Lovely Eggs have played hundreds of gigs around the UK, USA and Europe.

With observational and often surreal lyrics about life The Lovely Eggs have a powerful stripped down sound: one vintage guitar amp, one Big Muff distortion pedal, a guitar and a drum kit.

They have produced five albums. The latest “This Is Eggland” was produced and mixed by Dave Fridmann (Flaming Lips, Mercury Rev, Mogwai, MGMT, Tame Impala) at his studio in upstate New York. It is due to be released in February 2018

Their recent single “Wiggy Giggy” saw them added to the BBC 6 Music Playlist for the first time and it received massive support from DJs across the board at BBC 6 Music.
Steve Lamacq made the track his “Lamacq Livener” playing it every day on his show while Radio X’s John Kennedy chose it as his “Exposure Big One” – again playing the track every night on his Exposure show.

In February the pair headed out on a 10-date sold out tour of the UK with poet and comedian Phill Jupitus, producing their very own tour zine (to accompany the new album) and playing rammed chaotic shows to an army of growing fans and the tour continues into the summer with a new date at Bedford Esquires.

Tickets are on sale now from online Seetickets priced £12 and physical paper tickets can be bought in person (booking fee free) from Esquires Bar / Slide Record Store / Mario’s Hair Design from Friday 4th May (not before!)