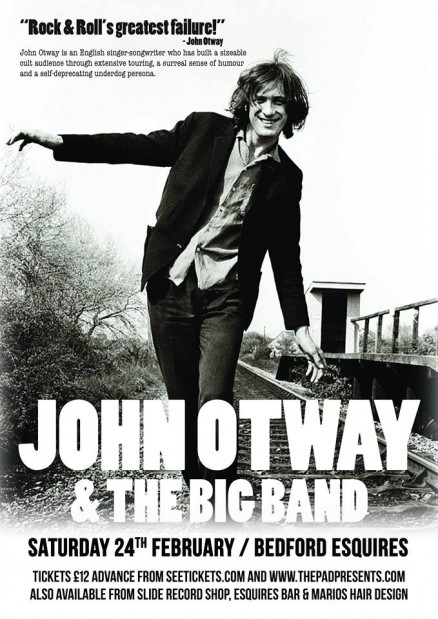 A big welcome back to John Otway to Bedford Esquires following his sell out show at the venue earlier in 2017. This time John is upgraded to the main stage as he returns this time with His Big Band.

John first achieved notoriety with his eye-watering performance on Old Grey Whistle Test and subsequent hit single ‘Really Free’ in 1977. A heady mix of blind ambition and rank incompetence was to keep this micro-star shining for almost two decades despite Otway’s ability to turn any situation to his own disadvantage.

His autobiography ‘Rock and Roll’s Greatest Failure’ out sold, by a factor of ten, all the records he had released since his hit, and now Otway is struggling to live up to this billing – selling out London Astoria for his 2000th gig in 1993, filling the Royal Albert Hall in 1998, and charting at number 9 with his 2002 single ‘Bunsen Burner’.

2013 was another whirlwind year for Otway. His film ” Rock and Roll’s Greatest Failure – Otway The Movie ” has been playing to packed houses across the country, was shown at Glastonbury and selected for the prestigious Cambridge Film Festival.

In the midst of Britain’s 1970s punk revolution and after a momentous TV appearance where five and a half million viewers watched him land painfully on his testicles, Otway was high in the charts, his next HIT was 25 years later.

Expect a great laugh plus all the rocking’ hits: Beware Of The Flowers, Really Free, Geneva, Bunsen Burner, Green Green Grass of Home, and many more!For John ‘Two Hits’ Otway, ‘the future’s bright; the future’s Otway!Tickets priced £12 advance are on sale now online from Seetickets and in person from Esquires Bar, Slide Record Shop & Mario’s Hair Design in Kempston‘He’s a cabaret act masquerading as a rock act. He is gleeful, anecdotal, funny and life-enhancing.’’ Canterbury Fayre Review.

“…makes it difficult to tell if he is barking mad or a musical genius….” Screenjabber Review