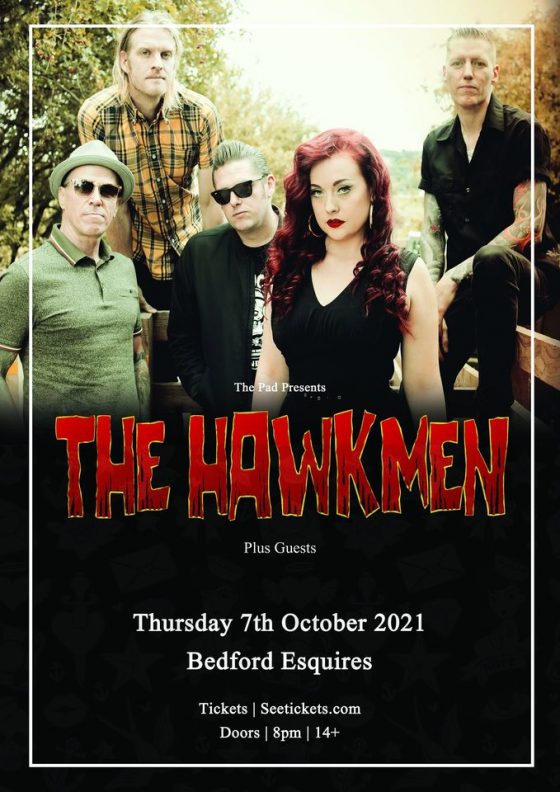 Unfortunately due to unforeseen circumstances we are having to postpone this show. We are currently working on a new date for next spring and will let you know when this has been confirmed. Apologies for the short notice. Bedford Esquires
The Hawkmen
Saturday 5th March 2022
Doors at 8pm
Bedford Esquires
We are excited to welcome The Hawkmen to Esquires in March  – please note this show has been rescheduled from Thurs 7th October 2021, all ticket remain valid. .
The Hawkmen draw from an array of influences such as rhythm’n’blues, soul, and rock’n’roll which they bring together in a classic, rootsy, hybrid blend. The band emerged as a full, live act in 2017 following the early successes of soul 45 and Craig Charles favourite, Don’t Judge A Book By Its Cover (Record Kicks, Italy), a northern soul remix of Emma Beatson’s debut single Do It (selected by Craig Charles for the second volume of his Freestyle Records compilation series) and The Hawkmen’s blazing Keep On Working EP (Mocambo, Germany) which yielded another 45 and was widely played on BBC Radio 2 and Radio 6.
In 2017 Love Is Blind was released and features on the Craig Charles Funk and Soul Club Vol.5 compilation and received more BBC 6 Music airplay. 2018 got of to a flying start with the release of the Chemistry Of Love single, yet more plays on BBC 6 Music, leading to a mini UK tour and concerts in Germany and France. 2019 has seen the release of Soulful Dress (a huge dance floor hit), The Hawkmen’s self titled debut album, and the live video for ‘Baby Tonight’, which has gone viral on YouTube with over 200,000 views and rising. The bands’ live concerts have gone strength to strength with a mini uk tour, headlining the Frogfest Music Festival in High Wycombe and an appearance at the Boomtown Festival 2019.
Support TBC
Tickets are £10 in advance + booking fee from seetickets