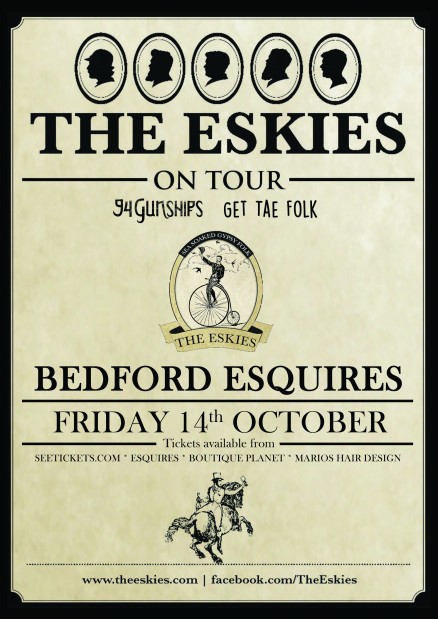 Having been cast out, blacklisted, rejected and ejected from gentlemen’s clubs far and wide, five dejected cast asides joined forces in what was to be their own celebration of commonality.

Purveyors of music that meanders from sea soaked waltz to Italian tarantella, from Brassy funeral march-esque lament to weep along Klezmar knees up, from chain gang holler to rag time finger snap. Skipping through the dark side of anything that makes you want to dance, steeped in melodrama and usually with not a small amount of tongue in cheek. The Eskies have brought this unique brand of folk noir/gypsy jazz/sea shanty and swaggering stage spectacle to ballrooms and booze houses far and wide, sullying soirees and lowering inhibitions of get togethers and social occasions wherever they have ventured.

The band last visited Esquires back in and rocked Holy Moly’s as special guests for the CC Smugglers after-show party, this time they are upgraded to the main stage, their debut album ‘After The Sherry Went Round’ is in shops now and is also available for download from iTunes.

Special guest support from Nottingham’s 94 Gunships and opening proceedings will be Get Tae Folk.

Doors open at 8pm Tickets are sale priced £6 from Esquires Bar, Planet Boutique in Bedford and Mario’s Hair Design in Kempston and online from Seetickets.

“Like a wagon storming the citadel, The Eskies’ brand of gothic-tinged gypsy-folk swaggers out of the speakers with intent.” – Hot Press Magazine

“From the sinister sway of ‘Eloise’ through to the jaunty ‘Jesus Don’t Save Me’ and the driving ‘Jailhouse Sun’, The Eskies have delivered a fascinating blend of fun-fuelled folk.” – The Independent

“The album is a raucous fanfare of folk, swamp blues and unquenchable merriment, paired with brain-burrowing melodies and witty lyrics, delivered at breakneck speed.” – Goldenplec

“Indeed, the album exudes a vim and visor that bursts from out of the speakers…makes for an incredibly entertaining experience.” – The Last Mixed Tape