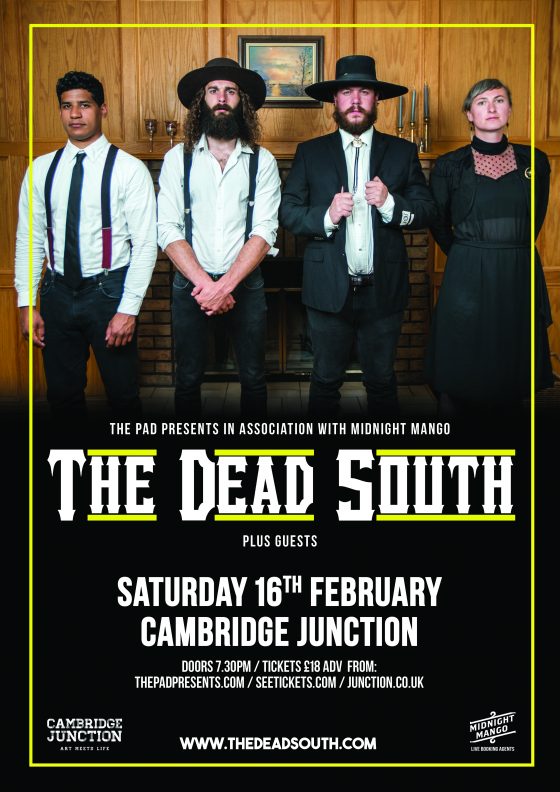 We are very pleased to be hosting our first show at Cambridge Junction, with a band we have worked with already in 2018, the rather excellent The Dead South!

The band made their UK debit in April 2018, with every single date on the tour selling out – We highly advise grabbing tickets in advance.

Saskatchewan is how it sounds: A province in the prairies of Canada. Double the size of Germany, but with less than one million residents. Lots of nature, and lots of silence. Perhaps lots of time to fill the silence with natural sounds, too.

This is where the quartet The Dead South comes from, and fits perfectly within this description. The debut album “Good Company” revealed the four hatted, hairy and bearded fellas, with singer Nate Hilts as a focal point. The album is a perfect fit to the genres Folk, Neo-Folk and Bluegrass-Folk or even alternative Country with refreshing tunes to it. With impact, humor and a kind of bold manner of putting words into sound. The instrumentation stays knowingly pure: guitars, cello, banjo, kick drum, mandolin – building the acoustic fundamentals for full lead vocals and harmonies.

The Dead South is truly a one of a kind artist, 2018 saw a sell out UK tour, 2019 will undoubtedly see them make huge strides in the UK!

Tickets priced £18 are on sale via Seetickets & the Venue box office.

“Nu-Folk? Alternative BlueGrass? The Dead South not only covering one genre and that’s something great.” – countrymusicnews.de

“This Canadian band are mixing Americana, Bluegrass and Country or even do Polka that explodes….love them or hate them, but this band is fantastic.” – Guitar Acoustic

“The Dead South is a real authentic line up doing music history bashing at its best.” – gaesteliste.de

“With their wide spectrum they’re way ahead of all other Neo Folk bands around.” – Classic Rock