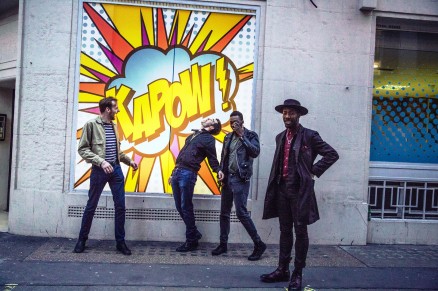 THE PAD PRESENTS
www.thepadpresents.comTHE BOHICAS + Sean Grant & The Wolfgang
Friday 14th August, The craufurd Arms, Wolverton, Milton Keynes
We’re very pleased to have one of the UK’s hottest new bands The Bohicas coming to play MK The Craufurd Arms (Live Music Venue) as part of their debut album tour.“Like a punch in the face, in the best possible way” – Annie Mac, Radio 1

Following last week’s launch of their new single and video Swarm, The Bohicas today announce further live shows in celebration of the release of their debut album ‘The Making Of’ on Friday the 21st of August. The band will be performing a number of instores* and a handful of special provincial headline shows around album release, and we’re very lucky to have snagged one of them!

The Bohicas are rock and roll painted in v…ivid primary colours. Hi def, loud, fast and shiny. A barrage of killer hooks, razor blade riffs and choruses that slap you in the face, grab your hand and lead you onto the dance floor. All shot through with pulp imagery torn from the pages of a graphic novel.

You can pre-order the band’s debut album ‘The Making Of’ now via Domino Mart and iTunes. See the band’s website for ticketing details – http://live.thebohicas.com/ You can pre-order a signed copy of the album with your UK gig tickets as an optional extra – £8 for the CD or £18 for the deluxe LP (plus P&P).

Tickets are £8 advance – We strongly advise buying tickets in advance for this show.

Tickets are on sale now from:
http://www.seetickets.com/event/the-bohicas/the-craufurd-arms/899019