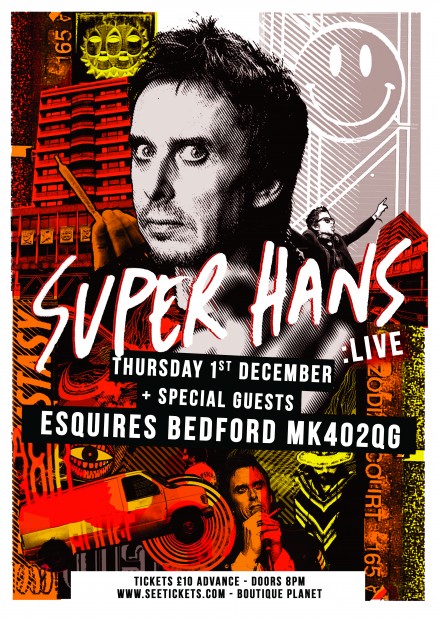 “The longer the note, the more dread. Get ready for a 247 second long D” – Super Hans on DJing

Things are about to get pretty f*kin moreish in Bedford town, as drug addled crack head Super Hans will be PLAYING A FULL LIVE SHOW to create a POWERFUL sense of dread at Esquires, Bedford. Expect “choonz and jokes innit”

After festival performances as Super Hans which have been praised by the likes of NME, Esquires welcomes one of the hottest sets in the UK, with the first announced London date selling out in less than 20 minutes.

One of the nation’s most beloved comedy characters Super Hans is renowned for his love of drugs (he once took 4 grams of coke to relax himself for a speech) and his musical prowess (his sound was stolen by The Chemical Brothers). Matt King spent 15 years as a stand up comedian in Australia before returning to the UK to be cast as Super Hans. He has starred in and co-wrote Dogface on Channel 4 as well as Starlings (Sky1) and Whites (BBC2). He has also appeared in The IT Crowd, Skins and Doctor Who. “A whole lot of fun” NME “People like coldplay and voted for the Nazis.You can’t trust people” – Super Hans.

Tickets are £10 adv and on sale NOW, don’t sleep on them: Tickets will be available from Boutique Planet from Friday 28th October. 16+ only Doors 8pm – 11.15pm Support from Sam Voidoid