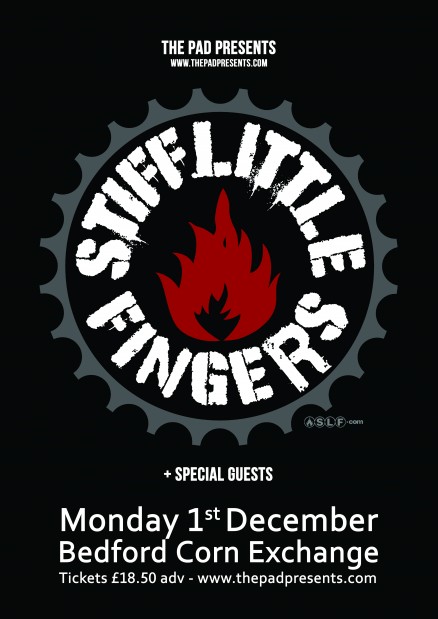 Stiff Little Fingers round off 2014 with a few select UK dates to end the year, of 5 dates on the tour the only southern date is here at Bedford Corn Exchange on Monday 1st December.

Stiff Little Fingers were formed in 1977 in Belfast, Ireland. Along with the likes of the Clash, Sex Pistols, The Jam, Buzzcocks, Undertones, Sham 69, Stranglers et al – Stiff Little Fingers were at the forefront of the punk movement. They wrote initially about their own lives, growing up at the height of The Troubles in Northern Ireland, in songs like “Suspect Device” and “Wasted Life”. In November of ’77, they released those two songs on their own Rigid Digits label, and sent a copy to BBC Radio One DJ John Peel, who started playing it every night.

These were the first of what became SLF’s signature style: lyrics that meld the personal and political, music that combines the energy of punk with infectious hooks, and delivery that rings of honesty and commitment. In 1979 they became the first band ever to hit the UK top 20 album charts on an independent label with their debut classic Inflammable Material. The album chronicles the band’s anger and frustration at “the Troubles” in Northern Ireland, and calls on youth to create their own reality. Their live shows continued to be special events of energy and power. The Go for It LP in ’81 revealed more sophisticated song writing and musicianship, and another step in the shift from punk to power pop.

The band split in early ’83 only to reform five years later in ’87 finding themselves playing to sell-out crowds larger than any that SLF had played in their original incarnation. The response followed suit across the globe and their following has continued to grow, with younger “new” fans alongside the old diehards. Although the band play some new material, they always play the old favourites at gigs including Nobody’s Hero, Tin Soldiers, Gotta Gettaway Suspect Device, Alternative Ulster.

With a classic back catalogue in place SLF have proved in 2014 that they are as much loved then as they are now, in September the band released their first new album in 7 years ‘No Going Back’ which saw the band return to the national UK top 20 album chart as well as sitting at number 1 in the UK rock chart.

Special guest support will be announced nearer the date.

Tickets are on sale priced £18.50 advance, standing in the main auditorium and reserved seating on the balcony. Doors open at 7.30pm.

On sale from Friday 10th October at: