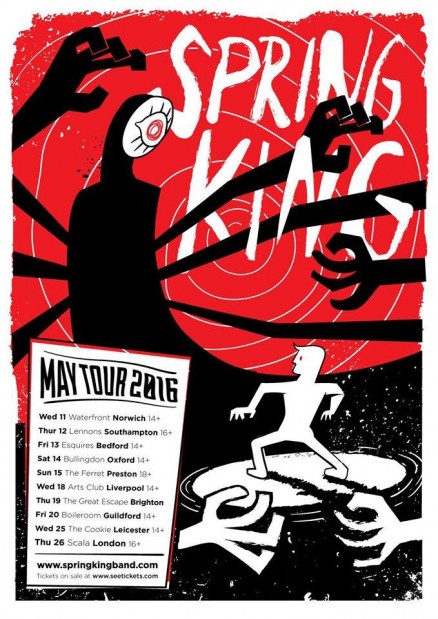 Spring King is a four-piece post-punk band from Manchester. They are ‘a small-scale, art-pop-punk project.

The band hit the road for a handful of select shows following a year that saw them pick up support from the likes of The Guardian, Stereogum, NME, DIY and The Line of Best Fit, along with becoming the first ever band to be played on Beats 1; being playlisted at both Radio 1 and 6 Music; and touring with Courtney Barnett, Slaves and FIDLAR.

With extensive 6music play, Radio One Maida Male sessions, championed by Zane Lowe, the first band ever played on Apple’s Beats 1 and more, there’s huge excitement in the music scene about this up-and-coming prospect.

New single ‘Who Are You?’ was launched recently and announced as hottest record in the world on Radio 1 by Annie Mac and has just been A listed on 6 Music. Huw Stephens has also just made it his record of the week on Radio.

‘From songwriting experiment to the most hyped uk guitar band of the year.’ NME

‘…one of the most exciting live acts in the UK: raucous but not sloppy, delivering infectious melodies with copious amounts of energy.’ BBC Introducing ‘They’re either going to crash headfirst into the nearest hazard, or they’ll speed by into stardom.’ DIY Mag

‘Like the bottled-up energy of a university house party in full swing.’ The Telegraph

The band visit Bedford Esquires on Friday 13th May. Tickets are on sale now priced £8 advance from Seetickets and all the regular outlets. This will be the last tour of venues of this size so catch them up close and personal before they leap into bigger venues later in the year, you saw them here first!