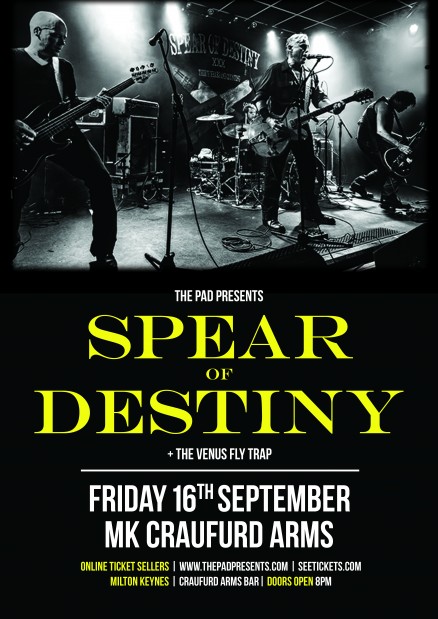 Hard to believe we know but it is true, Kirk Brandon has now been leading SPEAR OF DESTINY for over 30 years.

2014 saw the release of the band’s 13th studio album “31 (Thirty-One)” These brand new studio recordings were released on Vinyl, CD and Digital via kirkbrandon.com, Bay Music Distribution and The Orchard Digital Platform. The lead track from the album “Fascinations” is the title song from a feature film “Mob Handed” which is to be released in June 2016.

The current line up of Spear is the longest serving to date and features Adrian Portas (New Model Army / Sex Gang Children), Craig Adams (Sisters of Mercy / The Cult / The Mission) and Phil Martini (Jim Jones and the Righteous Mind)on drums. Long time Brandon cohort Steve Allan-Jones will be covering the keyboards.

During 2015 SOD headlined over 50 UK club shows as well as topping the bill at October’s Whitby Goth Festival. Brandon’s own fan club event “Westworld Weekend” sold out for the 3rd year running in May 2016..

The current live show pulls on songs from all 30+ years of SOD. The classic’s Liberator, Mickey, Rainmaker, The Wheel, Never Take Me Alive etc… are all found sitting closely alongside newer fan favourites such as Age of Unreason, Prison Planet, Judas, Lucky Man, Last Man Standing and of course a handful of songs from ‘31’.

Kirk Brandon debuted at the Craufurd Arms performing a solo show earlier in the year and sold the venue out and this is Spear Of Destinys first full band show in MK for over 10 years.

Tickets are on sale via Seetickets priced £15 advance and available shortly from the venue in person.

Comments on Kirk Brandon and Spear of Destiny:

The BBC’s Jeremy Vine says, “Kirk Brandon is one of our greatest musical geniuses”

Aberdeen Voice: Thirty one years together makes for flawless instrumentals, a unique sound, and some remarkable riffs and harmonies.