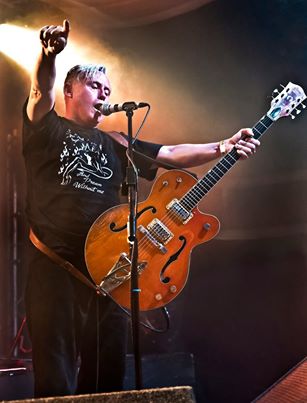 Hard to believe we know but it is true, Kirk Brandon has now been leading SOD for 30 years. To celebrate a 6-week European tour in October and November 2013 is being undertaken.
… These very special concerts will contain tracks from all 12 SOD studio albums, a new song from 2014’s new album “Thirty-one” and a previously little heard gem from1984 “Institution’.
To coincide with the tour a career spanning box set, Spear of Destiny “Thirty Years and Counting” will be released on Vinyl, CD and Digital via kirkbrandon.com, Code7 Distribution and The Orchard Digital Platform.

SPEAR OF DESTINY formed in 1983 after the demise of Kirk Brandon’s post punk iconic rockers THEATRE OF HATE. (Brandon had also, before TOH, been the main man in every punk rockers favorite band of that era The Pack)

The current line up of Spear is the longest serving to date and features Adrian Portas (New Model Army / Sex Gang Children), Craig Adams (Sisters of Mercy / The Cult / The Mission) and Mike Kelly (The Mission).

On latest studio album ‘Omega Point’.
Vive le Rock! Magazine said “Kirk Brandon is one of the UK’s most underrated songwriters and ‘Omega Point’ is a fine addition to his arsenal of epic albums”.

Tickets priced £13.50 are on sale from Seetickets from Friday 14th June and will be available from Danny’s Bar at Esquires and Luscious Juice Bar from Friday 21st June priced £13.50
Guest support comes from Robed in Desire