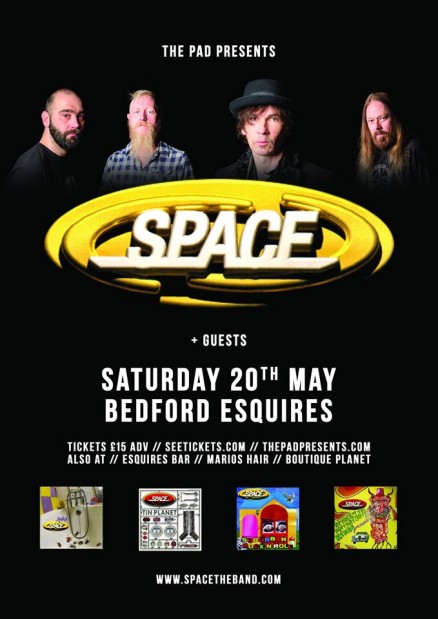 The band release the much anticipated new studio album “Give me your Future” in late 2016 and embark on a new tour of the same name in April – June across the UK and Ireland.

The new album is being recorded and produced by Grammy and Brit award winning producer Steve Levine who has worked with The Clash, Culture Cub, Beach Boys, Deniece Williams and Gary Moore to name a few.

2015 was a good year for the band with Female of the Species making the top of the al-bum charts with the “TFI Album” – (Number 1 in June 2015) Followed by the release of the “Strange World” single and the sold out 30 date UK tour of the same name.. Tommy said he was very proud of the Strange World single and the video shot by Mark McNulty, “it is a return to the true origins of the band, the tour has been mental with the whole audiences joining us on stage for the final encore of Female, just amazing nights with the fans, very special for me, for me its all about playing new music to new and old fans and playing them the hits” The bands last album release was ‘Attack Of The Mutant 50ft Kebab’- their first new album for nine years. Tommy’s influence for the new songs stemmed from his infamous fascination with science and horror films, and he likens the album to a ‘Fifties B-Movie’ for the ears. Proud to note how Space have always stood out from the ‘normal,’ Tommy concedes that their last album has the usual signature Space quirkiness, with some extra ingredients add-ed to the mix – he describes the songs as a mish-mash of SKA, Punk and the classic Space sound. “When we tour, we love playing the old stuff, but I always knew I wanted to record some new material. We know the fans like to hear the old classics from our multi-million selling albums ‘Spiders’ and ‘Tin Planet’, but we wanted to give them something ex-tra.” “The title track on the album is my favorite song from the record and is the story of how a fifty-foot kebab from a side street takeaway shop wreaks its revenge on the ailing high street. It’s a message about survival in a tongue-in-cheek way. The first single from the al-bum is a track called ‘Fortune Teller’ – keeping up with the mystic vibe!” Space have sold over 2 million albums world wide with titles including “Spiders, “Tin Planet” “Suburban Rock and Roll” and “Attack of the Mutant 50ft Kebab” and also released 10 top 40 singles and host of other single releases to-date with titles including “Neighborhood” “Female of the Species”, “Me and You Vs. The World” “Avenging Angels” “Dark Clouds”, and “Begin Again”.

Tickets are £15 adv, on sale now from Seetickets here: Full support line up to be announced This is a 14+ ages show, under 16’s to be accompanied by an adult.