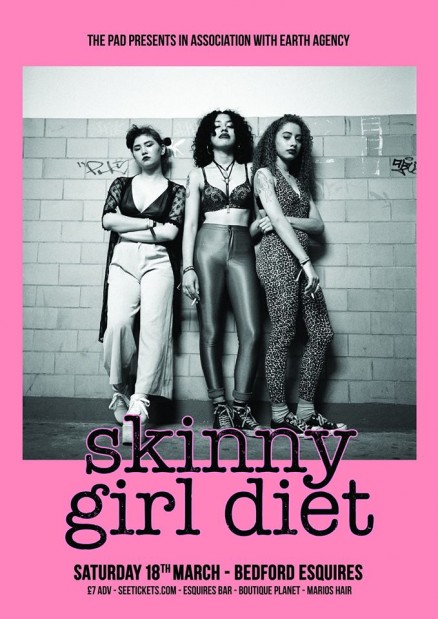 Three down to Mars girls from North London, these young women are fearlessly taking on societies problems one political lyric at a time. Skinny Girl Diet, forcing all to face the repulsive reality with this ingenious name that’s a social commentary on the slim fast culture the worlds been dragged into. Standing for all those that feel oppressed from feminism to black rights, their music oozes honesty and feeling.

Inspired by the heavily male dominated grunge scene, the 70s punk and the 90s riot girl movement, their music is completely their own, something new. They are working class females speaking for this generation and are definitely not a fad, they’d be screaming the same message whether you like it or not. Living life caught up with perfection? Well, Skinny Girl Diet rip those imposed ideals to shreds. Refreshingly, they don’t want to add auto tune or make music slick to get a billion dollar hit. Music to leave your ears ringing for more and live this band will push your senses to the limit, feeding your emotions whilst changing your perspective on life.

Earning touring stripes with their own generation’s best with the likes of The Fat White Family and Slaves. At the start of this year, they’ve appeared alongside legends John Cooper Clarke and The Raincoats. The king Iggy Pop recently said “Here are some people who just want to reach out and grab your ears” when he played them three times on his Iggy Pop Confidential guest BBC Radio 6 music shows and everyone from XFM’s Jon Kennedy, BBC Radio 6’s Steve Lamaq, BBC Radio 1’s Rob Da Bank and Amazing Radio have put them on the airwaves loud and clear. Without any help these three musical activists have graced the cover of Beat, can be spotted online and in magazines like Dazed and Confused, Vice, Vogue, Crack and The Guardian. Not to mention the stacks of underground zines they’ve been featured in this year, you can’t escape these women.

This group of raw, serious, teenage, DIY musicians will not be ignored. They will not go away and you can be sure they don’t give a damn about you, me or anyone’s opinion for that matter. They are like the punk power puff girls defeating all obstacles in their way. They certainly put sceptics, critics and sexists in their place and defy labels of how people view females in music. If you’ve been sleeping through life, ignoring the truth, Skinny Girl Diet will certainly wake you up. But can you handle it?

“At last, real girls, young and believable, singing in their own voices.” – Viv Albertine (The Slits)

“Delilah, Ursula and Amelia have been putting the grrr in riot grrrl, since they first got together.” – i-D