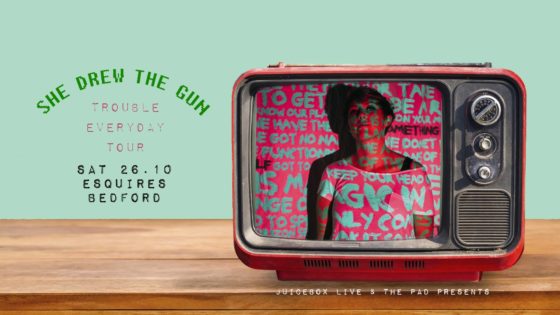 She Drew The Gun + Guests

SHE DREW THE GUN + GUESTS

Under the moniker She Drew The Gun, the Wirral native started playing solo gigs with a handful of songs in 2014. Meeting James Skelly of The Coral in 2015, Louisa began recording with Skelly at Skeleton Key Records and recruiting band members along the way. After touring Europe with Fink in 2015 Louisa emerged in 2016 with debut record Memories of the Future and a fully formed band.

That year the group saw off 5,000 competitors to win Glastonbury’s emerging talent contest, made their first TV performance on Soccer Am and supported The Coral on a UK tour. After adding new songs and reissuing their debut album as Memories of Another Future in 2017 they continued to tour, performing at SXSW and across a string of UK festivals including main stage performances at Glastonbury, Deer Shed, Cambridge Folk Festival and On Blackheath amongst others.

In 2018 the band have continued to tour as well as recording a new album with Skeleton Key Records due for release this year. They continue to win over fans with their lyrically evocative style coupled with meticulously layered songs and have been taking their message outside the UK playing gigs in numerous European capitals.

AVAILABLE FROM THE FOLLOWING OUTLETS:

So you know what to do now, click on JOIN, then invite your friends and spread the word!