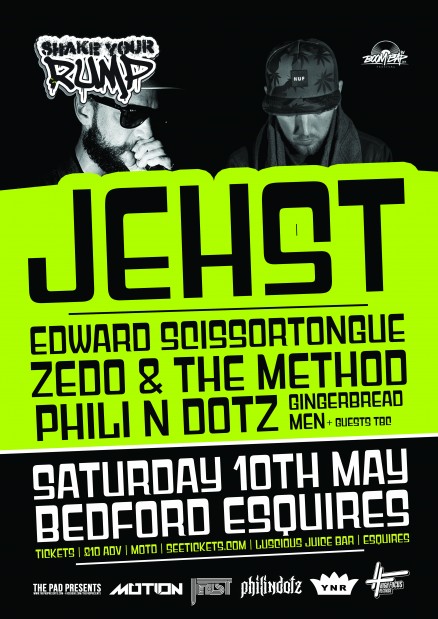 After the success of our first ever Shake Your Rump with Taskforce and Dirty Dike on March 1st, The Pad Presents and Motion teams are back once again with the second installment.

Celebrating The Four Elements Of Hip Hop, from the UK, US, Underground and back again, SHAKE YOUR RUMP will be bringing the finest UK and internationally known MC’s, DJ’s, Breakers and Graff artists to venues across the 3 counties on a bi monthly basis.

‘In conjunction with Boom Bap Festival 2014′

We are so hyped to have one of the true wordsmiths in the Hip Hop game – The High Plains Drifter, Billy Billy Brimstone, Mr Jay Star himself – JEHST!

The former Low Life and now YNR artist is one of the true legends in British Hip Hop still touring today, with a steady releases since his 2002 ‘High Plains Drifter’ album debut, Jehst has gone on to release the seminal Falling Down album alongside Underworld Epics and The Dragon Of An Ordinary Family. Anyone who has witnessed him live before know this is not a show to miss!

EDWARD SCISSORTONGUE
+ DJ Sammy B Side

We’re pleased to announce that we’ve gone all out to bring another one of the scenes biggest rising stars to the party, High Focus Records man EDWARD SCISSORTONGUE!

Over the last few years Edward Scissortongue has morphed into one of the most outlandish and enterprising musical entities operating in the UKHH scene. He brings DJ Sammy B Side with him to showcase tracks off his brand new Therimin EP, as well as the critically acclaimed debut album BETTER.LUCK.NEXT.LIFE.

The duo return to SYR for our second installment with a very special show in store – We can’t tell you too much at the moment as details are on lock down, but expect something special! Details to follow soon..

Our very own in house live band are back with a meaty, soulful hip hop set full of bangers. We also have something very special lined up with these guys and a live freestyle competition, more details soon..

A Hip-hop duo from Bedford, England, these self proclaimed unorthodox white rappers have been playing shows in and around the area since 2011 and showcase some of their finest tunes at SYR 002.

ON THE ONES AND TWOS:

Or online now from:
http://www.seetickets.com/Tour/jehst-edward-scissortongue