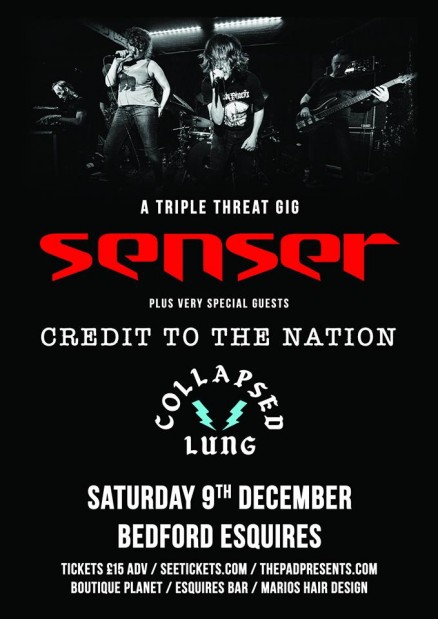 + CREDIT TO THE NATION + COLLAPSED LUNG

This December 9th we have put together a stellar line-up to rattle the walls of Bedford Esquires.

Headlining the event will be SENSER.  The band released three huge alternative club anthems in the mid-90s with Switch,  Eject & The key as well as denting the national charts with their top 5 album Stacked Up. With a further two albums released the band underwent a few line-up changes over they years but fast forward into 2017 and the band are now back together as the original line-up delivering the same powerful sound first unleashed in the 90s.

The second of the support slots goes to CREDIT TO THE NATION who burst onto the scene in the early 90s bravely sampling the Nirvana classic ‘Smells Like Teenspirit’ creating a huge club anthem with ‘Call it What You Want’.  Signed to the One Little Indian Label  ‘Credit’ released his debut top 20 album ‘Take Dis’ as well as hooking up with record label mates Chumbawamba to release the anthemic anti-fascist anthem ‘Enough is Enough’.

In 2017 the band are working on their yet untitled album due for release on the locally based Crossflow Recordings and the current line features label boss and local producer Karl Morey.

As if the line-up could not get any meatier opening up the party will be COLLASPED LUNG. The Harlow based alternative hip hop crew recently re-activated (not reformed!)

While probably best known for their Euro 96/Coca Cola tie-in “Eat My Goal” (which charted in both 1996 and 1998), the band also released two albums – Jackpot Goalie in 1995 and Cooler in 1996 on Deceptive Records, both being credible outputs but at the same time remaining humorous both on record and onstage.  They also explored themes of suburban / new town disaffection and absurdism through thoughtful (and sometimes abstract) lyricism. Musically, the underpinning was always classic hip hop beats, but overlaid with bass, guitar and sampladelia betraying a wide palette of influences – everything from 60s and 70s movie soundtracks to spiky post-punk. At one point they even covered “Connection” by their labelmates Elastica to great effect.

New and previously unperformed material is already featuring in their live sets, new records planned in the not-too-distant future.

Tickets are on sale now priced £15 via Seetickets and can be picked up in person (booking fee free / cash only) from Bedford Esquires Bar, Planet Boutique, Mario’s Hair Design Kempston & Vinyl Revelations in Luton from Wednesday 19th April