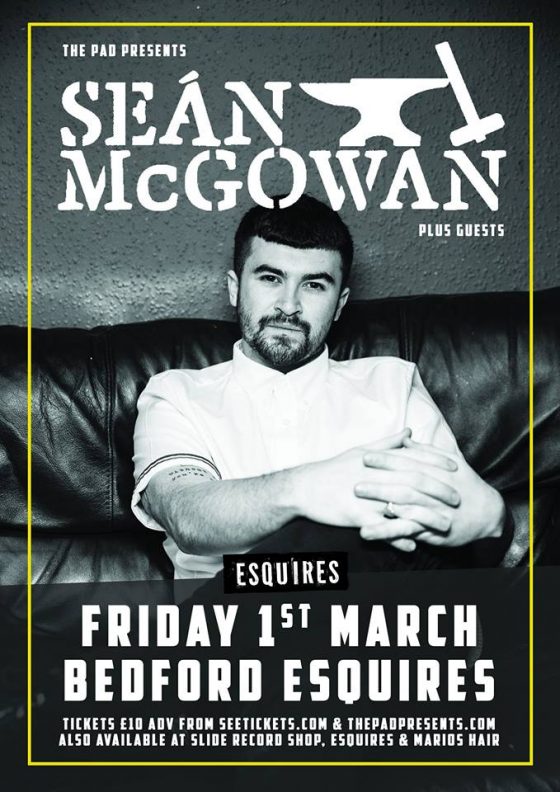 The ever-grafting son of the smith, Seán McGowan, is barrelling into 2019 via his favourite place: the road. With 2018 an indelible highlight and highpoint of his decade of crafting songs, Seán is stepping up his already considerable efforts to bring his smart wordplay and clash of sad and riotous tunes to everyone he can muster.

As he prepares for his biggest headline show to date, a Christmas homecoming in Southampton at the 1865 supported by friend and labelmate Get Cape. Wear Cape. Fly. Seán has now announced an extensive UK tour to kick off the new year.

Following the release of his debut album Son of the Smith in May 2018 – available on vinyl, CD and download from Xtra Mile Recordings – Seán has had opportunity after opportunity to show all sorts of crowds what he’s made of. His biggest show saw him performing main stage at the legendary Camden Roundhouse as one of the main supports at Frank Turner’s Lost Evenings II. He toured with more friends and Xtra Mile family Skinny Lister, Get Cape. Wear Cape. Fly. and Will Varley, as well as fellow working-class hero Billy Bragg. He skirted the fringes of the island with a set of dates in lesser-played Scottish towns. And he ended a year of touring with a UK and European jaunt with eternal folk travellers The Levellers, in somewhat of a dream support slot.

Now, as always, he’s thinking big and now’s the time to see Seán get his band in on the act for this full UK tour in February and March 2019, with 21 stops and hardly a day off in between. He comes to us here on Friday 1st March to play our second room, Holy Molys.

Tickets are £10 adv, on sale 10am, Friday 16th November from Seetickets: https://www.seetickets.com/event/sean-mcgowan/bedford-esquires/1288500