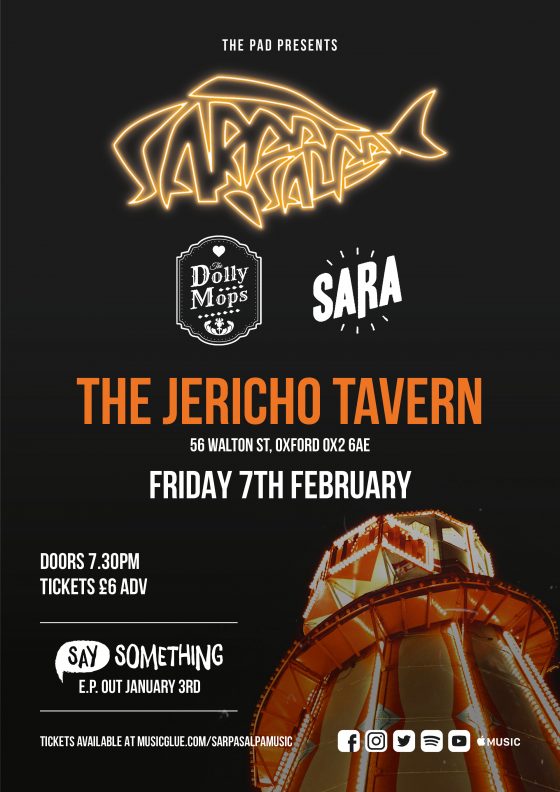 The Pad Presents….
SARPA SALPA + The White Lakes + SARA
7.30pm, Friday 7th February, The Jericho Tavern, Oxford
Tickets £6 advance / *Over 18’s only*
Following a trio of impressive singles in 2019 Sarpa Salpa unleash their debut EP “Say Something” on Friday 3rd January 2020. The lead track of the same name; “Say Something” sees the band crank up the tempo and return to their indie dancefloor roots with a stomper of a synth powered banger which has had crowds at their live shows hooked from the opening bars.
The EP also features fan favourites “Lost Time” and “Paralysed” as well as successful recent single “Before It Goes Dark” best described as “brilliant pop for the next generation” (Chris Hawkins, BBC 6 Music).
The 5 track closes with an acoustic rendition of their former BBC Introducing Radio 1 Track of the Week “Casanova” from earlier in 2019.
Marcus, George, Ethan & Charlie have recently been joined by Meg on Keys bringing in another layer to the live show, the band take EP on the road around the for a run of dates in Jan & Feb.
SAY SOMETHING // LOST TIME // PARALYSED // BEFORE IT GOES DARK // CASANOVA (ACOUSTIC)
Following a couple of low key Spotify releases Sarpa Salpa released “Smith” in October 2018 picking up airplay on regional BBC Introducing and BBC 6 Music following this up in February 2019 with “Casanova”. The track received multiple plays from BBC 6 Music’s Steve Lamacq after seeing the band perform at Bedford Esquire’s as part of Independent Venue Week. “Casanova” then went on to receive daily airplay on BBC Radio 1 after being selected as BBC Introducing Radio 1 Track of the Week in March, gaining favourable reviews from the DJ’s. The band toured the single around the UK, culminating in a packed hometown headline show at Northampton’s 750 capacity Roadmender.
In August the band dropped the darker single “Before It Goes Dark” which was included in the BBC Introducing Hot-list on the week of its release. The single took on a life of its own in the autumn months picking up numerous plays BBC Radio 1 by Jack Saunders & Huw Stephens as well as further support BBC 6 Music by Steve Lamacq & Chris Hawkins. The track also received plays from John Kennedy & Gordon Smart on Radio X before being added to the Evening Playlist in October & even made an appearance on Made in Chelsea.
“Seeing them live reminded me of a young Catfish & The Bottlemen I saw at The 100 Club a few years ago – superb”
Steve Lamacq – BBC 6 Music
“I’ve been loving this one recently” “What a tune”
Jack Saunders – BBC Radio 1
“Sounding great here on Radio 1, one of my favourite tracks from the uploader recently”
Huw Stephens – BBC Radio 1
Very special guests for the evening are The White Lakes are a four piece indie rock band from Oxford. The White Lakes have supported bands such as Razorlight, The Night Cafe and Cassia, whilst landing slots at Truck Festival, Car Fest and Wychwood.
Known for their energetic, powerful live performances. They embark on their first UK Headline tour. The White Lakes have promised these shows are going to be full of surprises, wanting to bring the production value of a Arena show to the small venues around the UK.
Having released the much anticipated “Wolves” The White Lakes are getting ready for another release just before the tour begins. Be sure to catch these guys whilst they are still in small venues!
Opening up the evening will be Sara.
Having just released their stunning debut single ‘Little Nerves’, Sara Music will be joining Sarpa Salpa on some select dates in early 2020.
Taking inspiration from artists like Frank Ocean, Sufjan Steven’s and Bon Iver, Sara’s music is inherently melodic, but she utilizes unusual arrangements and displays of lyrical vulnerability, touching on themes of mental health, loneliness and sexuality.
We’re expecting big things from the 23 year old multi instrumentalist, make sure you make it in for her set.
Listen >> https://tinyurl.com/ukoh9hy
—————————–
Tickets online from Seetickets £6 advance / over 18’s only.