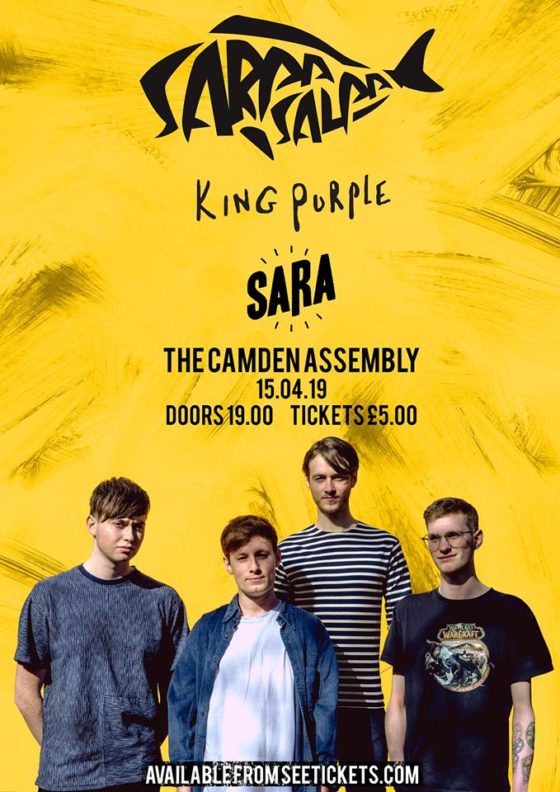 Sarpa Salpa
On the back of last year’s single “SMITH”, Sarpa Salpa didn’t rest on their laurels and unleashed their latest single release “CASANOVA”. The new single has been picking up airplay on 6 Music from Steve Lamacq and the band recently featured on his show as part of Independent Venue Week.

Frontman Marcus Marooth speaks of Casanova being about the high standards people have when entering new relationships, and how expectations can get in the way of connecting with people for who they are and not who you want them to be. He explains that these days it can potentially stop people blossoming as couples, and the track describes how some “people will chase the perfect love that doesn’t exist”.

The accompanying video which sees the four piece each play very different characters was shot and directed by legendary NME photographer Andy Willsher which was released on Valentines Day.

King Purple
King Purple are a three piece Psychedelic Grunge Trio infused with
influences of indie rock originating from Corby, Northamptonshire. The band are currently on the road playing shows around the country to early 2019 to support the release of their debut EP ‘Time Alone’, out late April. King Purple make their London debut at the Assembly as part of the bill

Sara Music
Exciting new artist SARA opens the evening. Last year’s lo-fi single ‘Low Signal’ heralded an introduction to an artist who is set for a big year in 2019. SARA started as a solo music venture by singer songwriter Sarah Cosgrove with the release of her 2017 EP ‘Haunt’. Since then the project has evolved to encompass a bigger sound with the addition of two new members and increasingly diverse material. Citing influences as varied as Sufjan Stevens to Frank Ocean, their tone shifts around acoustic, electronic and indie, all the while maintaining something personal, with an unnerving vulnerability to their sound.
Upcoming releases will see a huge shift in production from earlier offerings, with bold song writing that underpins SARA’s main aim of always making something meaningful. You will be hearing much more from the songwriter in coming months, make sure you make it in for her set!

Tickets priced £5 advance can be bought online from Seetickets & Ticketweb online and from the artists in person.
Set times and running order of the artists to be confirmed nearer the time.