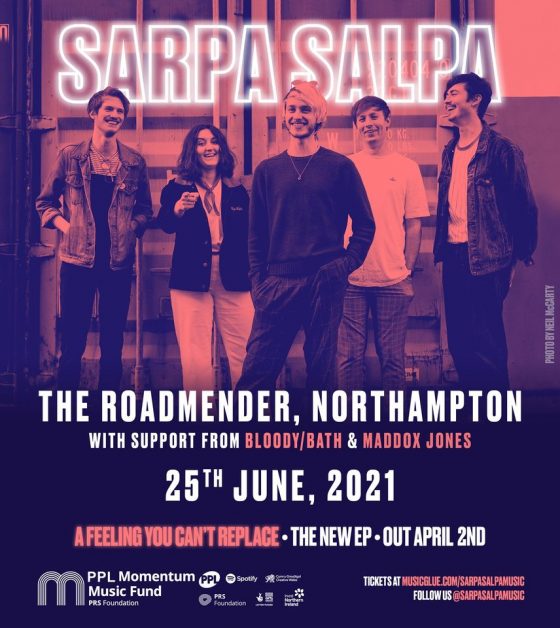 The Pad Presents….
SARPA SALPA
+ Bloody Bath
+ Maddox Jones
7pm Saturday 9th October THE ROADMENDER NORTHAMPTON
Pleased to announce the SARPA SALPA ‘Socially Distanced’ show at The Picturedrome has now been upgraded to a ‘full standing’ show at The Roadmender on June 25th. Tickets bought for the original date remain valid in the denominations in which they were bought (i.e. bench of 2 = 2 standing tickets, bench of 4 = 4 standing tickets). If you are unable to make the rescheduled show please contact Seetickets who will issue a refund.
Sarpa Salpa have kicked off this year with the release of their sophomore EP ‘A Feeling You Can’t Replace’. Tying together their three most recent singles along with two new tracks and a remix to be released on Friday 2nd April 2021. Building on their previous successes, the band’s most recent release ‘Another Life’ garnered support from Jack Saunders on BBC Radio 1, as well as on BBC Introducing (Radio 1), Radio X, Amazing Radio & across the Student Radio Association Network.
The 6 track EP, written and recorded during the ongoing pandemic posed a new challenge for Sarpa Salpa. No longer being able to perform live gigs, the band focused on writing new songs that pushed the boundaries of their songwriting. Communicating online meant they could still collaborate and generate fresh ideas, and then come together to record and perfect each song in the studio. Beginning the recording process in March, the last of the tracks were finished in December just before the UK went into its third national lockdown.
Joining them for the gig is Northampton’s BLOODY/BATH. Influenced by the 80’s records shown to him by his late mother; bloody/bath is the project of songwriter and multi-instrumentalist, Kailan Price. Garnering major plays on BBC Radio 6, top spots on editorial playlists, and praise from the British music zines, bloody/bath has been tipped as one to watch, an exciting prospect emerging from the depths of the lo-fi indie scene.
Opening proceedings will be the British soul-pop of Maddox Jones.
Tickets are priced £8 advance from Seetickets & The Roadmender online Box Office
This tour and the release of this EP was made possible by the PPL Momentum Music Fund supported by the PRS Foundation, PPL, Arts Council of Northern Ireland, Invest NI, Creative Wales and Spotify UK.