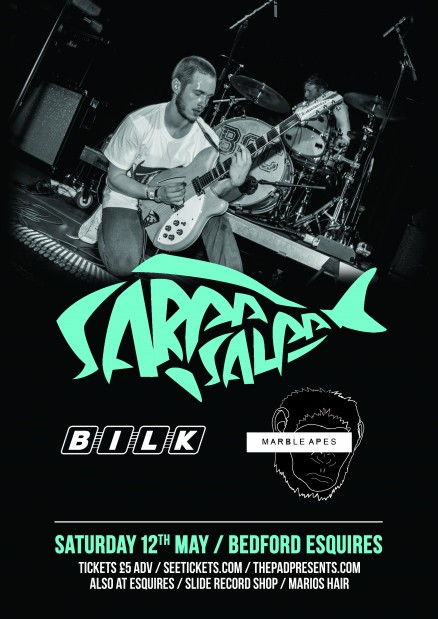 7.30pm, Sat 12th May, Holy Moly’s, Esquires, Bedford
With a few support shows under their belt at the venue including opening up for Inheaven & The Scruff, Sarpa Salpa return to the venue to play their first headline show in Holy Moly’s on Saturday 12th May

Following on from their BBC Introducing fave single ‘She never Lies’ the band saw a return to the studio in January has seen the band record two further singles to be released later in 2018 (details t.b.c). Since their last Bedford appearance Sarpa Salpa have been cooking up some new material as well as playing with numerous gigs both regionally and nationally including 4 dates at the Mano Musik Festival in Marburg Germany where the band closed the festival to 2000 people.

Special guest support comes from BILK. The raw and real sounds of Essex trio Bilk set the standards for guitar music in England with their unique blend of indie, rap and punk, one to look out for!
Opening up proceedings are Marble Apes who make their debut Esquires appearance.

The doors open at 7.30pm with the first band taking to the stage around 7.50pm.