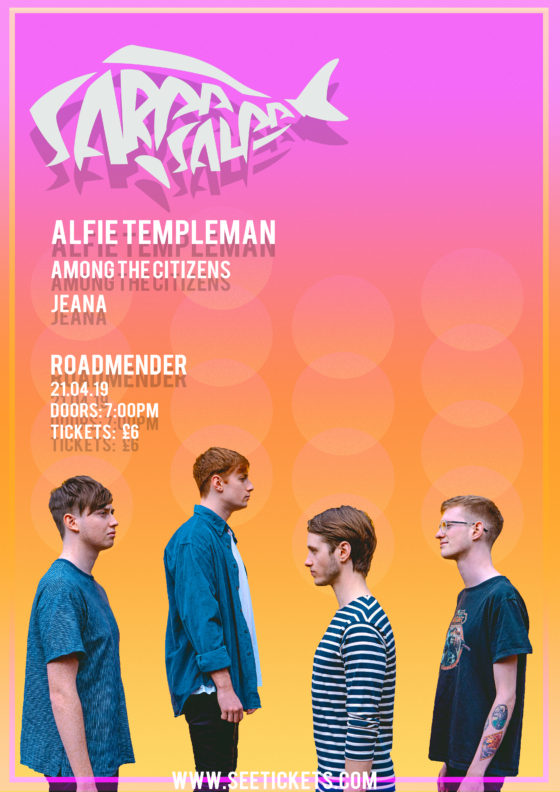 Sarpa Salpa return to the Roadmender on Easter Sunday 21st April for a special hometown show.
2019 is already proving to be a very fruitful period for the band, kicking off the year playing a very special show for Steve Lamacq as part of Independent Venue Week at Esquires in Bedford, with Steve playing the new single Casanova on his daytime show on BBC 6 Music 3 times prior to the show as well as airing an interview with Marcus Marooth the bands frontman. The single released on Valentine’s Day then caught the attention of Radio 1 who made Casanova BBC Introducing Single of the Week on the 15th March which saw the band picking up national daytime play across the radio station on every show.
Frontman Marcus Marooth speaks of Casanova being about the high standards people have when entering new relationships, and how expectations can get in the way of connecting with people for who they are and not who you want them to be. He explains that these days it can potentially stop people blossoming as couples, and the track describes how some “people will chase the perfect love that doesn’t exist”.

The accompanying video for the single sees the four piece each play very different characters and was shot and directed by legendary NME photographer Andy Willsher which has gained a whole lot of love over all the social media platforms.

Travelling around the UK Sarpa have handpicked the supports for the evening with some great bands they have played with along the way.

Every instrument you can hear on Alfie Templeman’s Like An Animal EP is played by him. What makes this even more impressive is the fact that he’s only 16 years old. Already causing a lot of buzz in the music world, Alfie’s sound draws a direct line from bonafide bedroom indie heroes across the pond, like Homeshake, Steve Lacy and lo-fi godfather Mac DeMarco.
Between studying for his GCSEs this summer Alfie has been sneaking in the odd live show here and there and has been supporting the likes of Gus Dapperton on some select UK dates and prior to this Northampton show will see him opening up Sundara Karma in Birmingham, Southampton and the vast London Brixton Academy.
The Sunday Times summed things up nicely: “If this is what he can come up with alone in his room at the age of 15, he has to be one to watch closely.” Get down early is all we say.

AMONG THE CITIZENS
Among The Citizens are a 4 piece indie/alternative band based near Peterborough, UK. The band have collaboratively created their own distinct sound from a blend of influences such as The Cure and Echo and The Bunnymen with their dreamy, infectious chorus guitar, as well as contemporary artists such as JAWS with their lush and memorable synthesiser/guitar melodies. In more recent years, they have enjoyed the west coast pop scene listening to bands such as HUNNY and Bad Suns.

They have supported Eliza and The Bear, The Scruff, Redfaces, Blushes, The Skinner Brothers and DYGL and sold out shows with promoters including This Feeling, Disorder, Lost in The Manor, Green Mind and Juicebox Live as part of their debut UK tour which took in cities including Brighton, London, Newcastle, Sheffield and Leeds.

Among The Citizens have received radio support from BBC 6 Music, BBC Introducing and Amazing Radio and won the New Music Generator award for Breakthrough Artist voted for by a panel of music experts from across East Anglia.

JEANA
Opening up proceedings is the new kid on the block solo artist Jeana. Jeana has spent the last few months working with shoe towns finest producer Gingersnaps and put out a banger of a single last month ‘The Feelin’. With only a couple of shows under her belt we were privy to a recent live show and it’s looking something very special indeed. Having just released her first single The Feelin it’s already picked up airplay on Radio X – Jeana kicks the night off at 7.30pm as with all the bands on the bill we would love you all to get down early and make this a really special night for everyone.

Tickets for the show are on sale now priced £6 advance from Seetickets and the Roadmender Box Office online and from individual band members.
*Please note this show is taking place in the small room at the venue, the last 3 times Sarpa Salpa have played the venue all of the dates have SOLD OUT in advance so an early ticket purchase is advised*