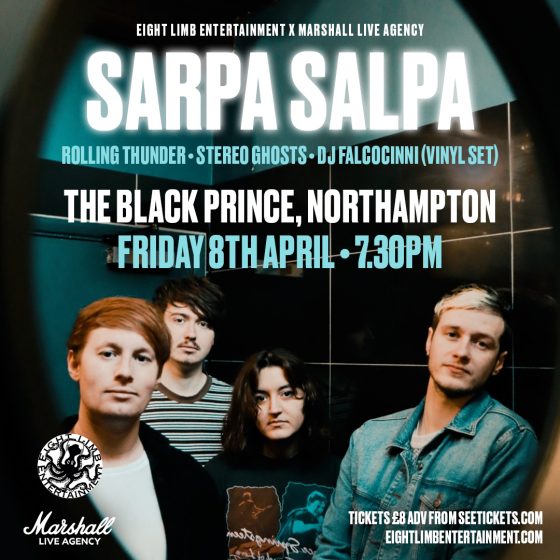 SARPA SALPA team up with Eight Limb Entertainment Northampton’s finest purveyor of vinyl releases to play a show at the Black Prince in Northampton their first show back at the venue since playing the ‘King of Hearts’ Festival in December 2017.

Since their last headline show at the Roadmender the band have undertaken numerous dates around the UK, released two new singles ‘Your House’ & ‘Somebody’ both gaining further attention on BBC Radio 1 with ‘Future Artists’ plays on Jack Saunders and ‘Future Sounds’ on Clara Amfo.  With some new material on the way, some further festival dates to announce and a run of high summer UK tour dates the band show no sign of slowing down.

The Northampton show will be the bands first gig after returning from the renowned Industry showcase SXSW (South by South West) inn Austin, Texas.   There will be chance to hear some new songs as well some of the old faves as the band continue move forward into 2022.

The line-up curated by ‘Eight Limb’ features main guest ROLLING THUNDER.  Cooking up storm everywhere they play the band have been getting out of the shire clocking up some great regional dates in Cambridge, Hitchin & Milton Keynes and support Indie upstarts The Royston Club in Bedford on their forthcoming UK tour.

Opening up the evening is STEREO GHOSTS.  Making name for themselves locally and getting out on the road regionally the band released their debut single ‘Know I Will’ at the end of 2021 and have picked up support from BBC Introducing.

Holding the night together seamlessly is DJ Falcocinni who will be dropping a vinyl set before, between and after the bands.