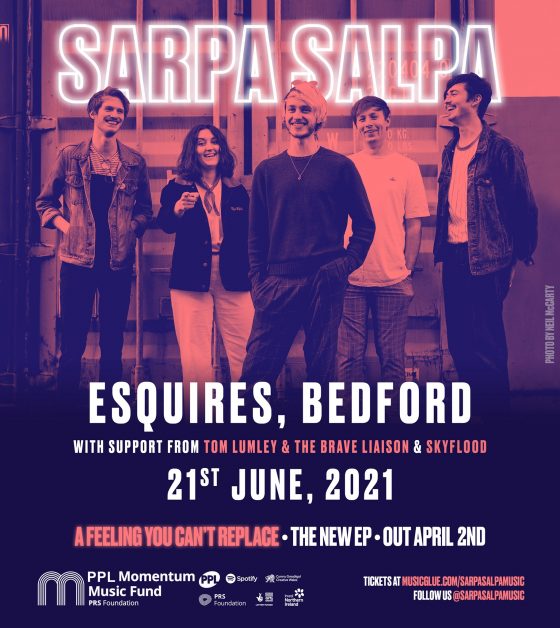 The Pad Presents….
Sarpa Salpa
+ Tom Lumley & the Brave Liaison + Skyflood
7.30pm Friday 20th August
Esquires, Bedford
Sarpa Salpa have kicked off this year with the release of their sophomore EP ‘A Feeling You Can’t Replace’. Tying together their three most recent singles along with two new tracks and a remix to be released on Friday 2nd April 2021
Building on their previous successes, the bands most recent release ‘Another Life’ garnered sup- port from Jack Saunders on BBC Radio 1, as well as on BBC Introducing (Radio 1), Radio X, Amazing Radio & across the Student Radio Association Network.
The 6 track EP, written and recorded during the ongoing pandemic posed a new challenge for Sarpa Salpa. No longer being able to perform live gigs, the band focused on writing new songs that pushed the boundries of their songwriting. Communicating online meant they could still collaborate and generate fresh ideas, and then coming together to record and perfect each song in the studio. Beginning the recording process in March, the last of the tracks were finished in December just before the UK went into its third national lockdown.
The title of the EP ‘A Feeling You Can’t Replace’ is a lyric taken from track 4 ‘As Good as It Gets’. Guitarist George Neath goes on to say:
“The title ‘A Feeling You Can’t Replace’ sums up how we were feeling when writing this EP. We miss live music and the ability to interact with both our fans and other musicians. We are so grateful that we were able to write over the Internet but it cannot replace the feeling of performing live music together, we feel like many can relate to this at the moment.”
This tour and the release of our new EP has been made possible by the PPL Momentum Music Fund supported by the PRS Foundation, PPL, Arts Council of Northern Ireland, Invest NI, Creative Wales and Spotify UK.
Joining us for the show will be special guests: Tom Lumley & the Brave Liaison & Skyflood.
This show replaces the previously announced ‘Socially Distanced’ seating events that were due to take place in February and April. Tickets for the seated socially distanced show remain valid in denominations of 2 and 4 people as purchased.
General admission tickets priced £8 in advance on sale now.