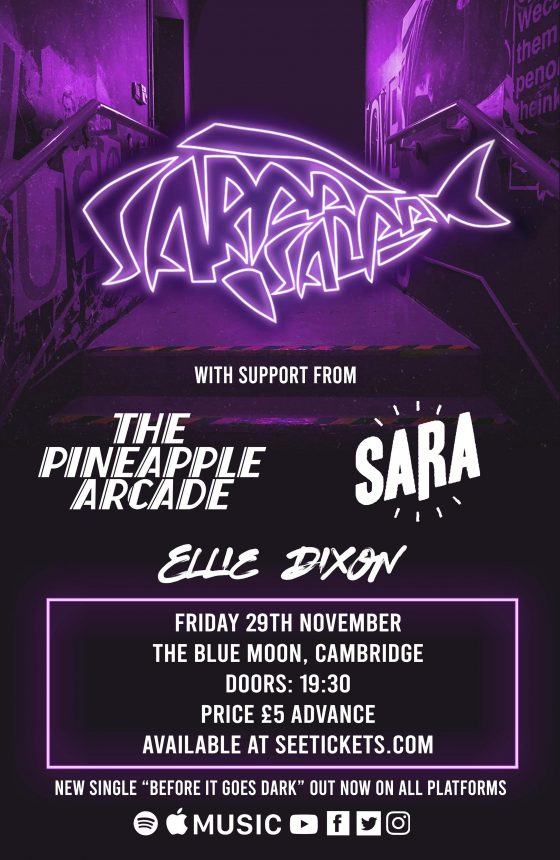 Keen to capitalise on the groundwork created by SMITH and relentless gigging, the band kicked off 2019 with the release of “CASANOVA” in February. During the same week the band performed at Bedford Esquires as part of Independent Venue Week. Steve Lamacq attended the gig and subsequently played new single “CASANOVA” several times on his show on BBC 6 Music as well as interviewing the band on air, comparing the bands intense live show to a “Young Catfish & the Bottlemen”.

Returning to the studio in spring, Sarpa Salpa set about recording their new single “BEFORE IT GOES DARK” one of the bands darker tracks to date which was released in August which has picked up numerous airplay on Radio 1 (Jack Saunders) BBC 6 Music (Steve Lamacq / Chris Hawkins) & Radio X (John Kennedy)

Guest support comes from Cambridge based The Pineapple Arcade an Indie rock group combining influences from artists such as Courteeners, Two Door Cinema Club, Circa Waves and Catfish & The Bottlemen. They are fronted by lead vocalist and guitarist Conor Andrews alongside rhythm guitarist Max Hunt, bassist Tom Woods and drummer Lewis Mandel.

The band’s debut single Conveyorbelt has clocked up over 50,000 streams on Spotify . They have twice performed at Wilkestock Festival supporting Slaves, We Are Scientists (2019), Mallory Knox and The Fratellis (2018).

Exciting new artist SARA takes second slot on the evening Last year’s lo-fi single ‘Low Signal’ heralded an introduction to an artist who is set for a big year in 2019. SARA started as a solo music venture by singer songwriter Sarah Cosgrove with the release of her 2017 EP ‘Haunt’. Since then the project has evolved to encompass a bigger sound with the addition of two new members and increasingly diverse material. Citing influences as varied as Sufjan Stevens to Frank Ocean, their tone shifts around acoustic, electronic and indie, all the while maintaining something personal, with an unnerving vulnerability to their sound.

Upcoming releases will see a huge shift in production from earlier offerings, with bold song writing that underpins SARA’s main aim of always making something meaningful. You will be hearing much more from the songwriter in coming months, make sure you make it in for her set!

1st up is Ellie Dixon is a 21 year old singer/ songwriter/ producer from Cambridge. She blends mellow indie pop with jazz and folk influences, defined by her soulful lyrics and unique and unmistakable voice. She has been writing, producing and recording songs for 5 years, releasing her debut EP Looking Forward onto Spotify and iTunes in 2016. Her latest EP, Growing Pains, was released in September 2018.

All this goodness online from Seetickets for just £5