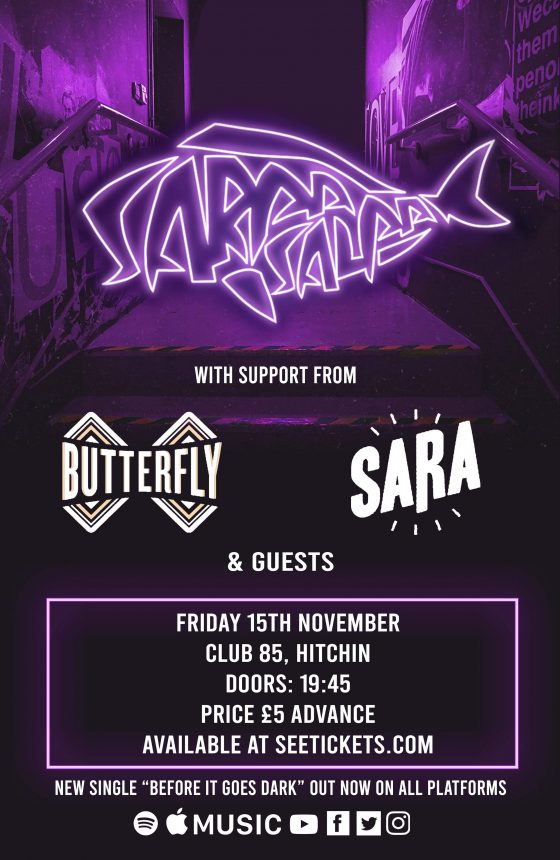 The band headed into 2019 as ones to watch following a hectic year playing over 60 shows with 20 UK Festivals including The Big Feastival, Wilkestock, BBC Introducing Live & BLOGTOBER Festival all whilst still working their day jobs.

Keen to capitalise on the groundwork created by SMITH and relentless gigging, the band kicked off 2019 with the release of “CASANOVA” in February. During the same week the band performed at Bedford Esquires as part of Independent Venue Week. Steve Lamacq attended the gig and subsequently played new single “CASANOVA” several times on his show on BBC 6 Music as well as interviewing the band on air, comparing the bands intense live show to a “young Catfish & the Bottlemen”.

Returning to the studio in spring, Sarpa Salpa set about recording their new single “BEFORE IT GOES DARK” one of the bands darker tracks to date which was released in August which has picked up numerous airplay on Radio 1 (Jack Saunders) BBC 6 Music (Steve Lamacq / Chris Hawkins) & Radio X (John Kennedy)

BUTTERFLY
The Butterfly sound has been described as “Psychedelic Everly Brothers”
Influences range from The Beatles to Sparks and Todd Rundgren, and the four of them deliver it all onstage with fun and swagger.
.
Social media:
Instagram : butterfly_band_official
Facebook: Butterflybandofficial

SARA
Exciting new artist SARA takes second slot on the evening Last year’s lo-fi single ‘Low Signal’ heralded an introduction to an artist who is set for a big year in 2019. SARA started as a solo music venture by singer songwriter Sarah Cosgrove with the release of her 2017 EP ‘Haunt’. Since then the project has evolved to encompass a bigger sound with the addition of two new members and increasingly diverse material. Citing influences as varied as Sufjan Stevens to Frank Ocean, their tone shifts around acoustic, electronic and indie, all the while maintaining something personal, with an unnerving vulnerability to their sound.

Upcoming releases will see a huge shift in production from earlier offerings, with bold song writing that underpins SARA’s main aim of always making something meaningful. You will be hearing much more from the songwriter in coming months, make sure you make it in for her set!

We are The Sukis!
A band located in Hitchin consisting of:
Tige – Guitar / Vocals
Leo – Bass
Joe – Keys
Jem – Drums

Tickets are on sale now priced £5 from Seetickets.and will be available from the local outlets from the 1st October