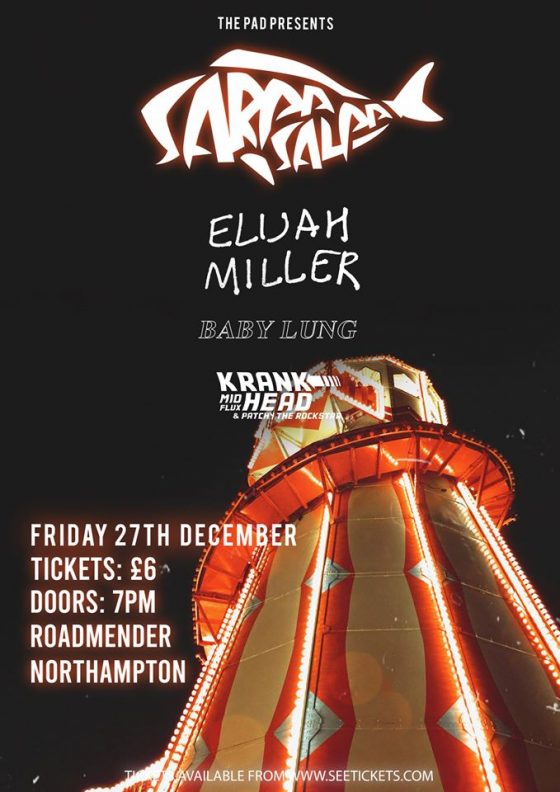 The band headed into 2019 as ones to watch following a hectic year playing over 60 shows with 20 UK Festivals including The Big Feastival, Wilkestock, BBC Introducing Live & BLOGTOBER Festival all whilst still working their day jobs.

Keen to capitalise on the groundwork created by SMITH and relentless gigging, the band kicked off 2019 with the release of “CASANOVA” in February. During the same week the band performed at Bedford Esquires as part of Independent Venue Week. Steve Lamacq attended the gig and subsequently played new single “CASANOVA” several times on his show on BBC 6 Music as well as interviewing the band on air, comparing the bands intense live show to a “young Catfish & the Bottlemen”.

Returning to the studio in spring, Sarpa Salpa set about recording their new single “BEFORE IT GOES DARK” which was unleashed on August 9th and has already been picking up play on BBC Radio 1 / Radio 6 / Amazing Radio & playlisted by Radio X. The track tackles the frustration of not being able to stop the inevitable, and is one of the bands darker tracks to date.

An unparalleled live performer, the last 18 months has seen Elijah sell-out his London headline debut at The Dublin Castle as well as packed out festival performances at 2000 Trees, The Ampthill Festival, Daxtonbury and a stage headline in his hometown at the Bedford River Festival. His single ‘Alfred Benson’ has now passed 160,000 streams with no signs of slowing down.

With influences from blues to jazz to hip-hop, Baby Lung create unique songs with moody feels that spans genres. Tailor made for those smokey, dim-lit atmospheres in chic clubs.

Mio Flux and Patchy, The Rockstar are KRANKHEAD. A producer/rapper duo that bring the party and energy to every stage. Mixing guitars, 808s and catchy flows to get anyone on their feet. The duo proudly played The Great Escape Festival 2019 under the new duo name (KRANKHEAD) and new music under the name is nearly ready for lift off.

Tickets are on sale now priced at £6.00 advance from Seetickets & The Roadmender website.