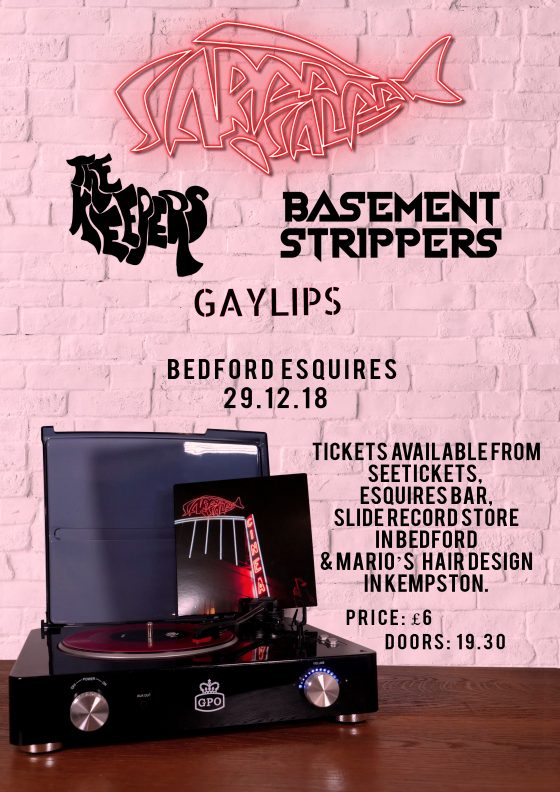 In the final Pad Presents show of the year we have lined up a big Saturday night bill to see out Christmas with 4 bands and a late club night to close proceedings.

Headliners for the night are no strangers to the venue as SARPA SALPA round off a very busy year with their first headline show on the Main Stage at Esquires.
The band have clocked up over 50 shows this year with dates in Germany & France and a mass of UK festivals and club dates. The band released their single SMITH in September which saw them pick up radio plays on 6 Music with Steve Lamacq and Chris Hawkins both featuring the single on their shows. In November the band were invited to play the BBC Introducing Live event at Tobacco Dock. Last seen storming Esquires as support to Electric 6 in August the band are set to release a brand new single ‘Casanova’ at the end of January.

Heading over from Northampton for the main support slot are THE KEEPERS.
Armed with a love of 60s Psychedelia & Hofner Guitars the band capture the sounds of the 1960’s Fuzzy Guitar Psychedelic Pop and give it a gentle kiss with 90’s Alternative/indie music.
Not afraid of hard work the band are relentlessly on the road week in week out which has seen them clock up some notable supports opening for the likes of The Beat, Space, The Spitfires, The Moons, The Franklys, The Wholls, VANT and in November saw the band secure a show at the legendary Shiine Weekender at Butlins.

BASEMENT STRIPPERS are a 4-piece Alternative Rock band from the shire of Bedford. Forming in late 2016, The band released their debut EP, The Exotic Show in the summer of 2017. The EP’s main single We Are Not Afraid was featured in motion picture “Dead Squad”.

The first part of 2018 for Basement Strippers has been spent building up their reputation gigging around the Bedfordshire and Hertfordshire area, however things stepped up for them in June when the band signed to York-based independent label Lucky Boy Records. Following almost immediately from the signing, they released their second EP, Echo Chamber. Featuring the lead single and stomping political anthem Blindfold, Echo Chamber is a collection of catchy, powerful and enticing rock songs. Not afraid to put the effort in the band played their own headline set at Esquires earlier in the year packing out Holy Moly’s in their own right and make the leap up the stairs for their first slot on the Main Stage.

GAYLIPS is a band with two people in it. One plays drums the other bass that is all. It does what it say’s on the tin.

Doors open at the slightly earlier time of 7.30pm with Gaylips opening things up from 8pm.

Tickets priced £6 are on sale now online from Seetickets or in person from the individual bands playing & can also be bought from the outlets of Esquires Bar, Slide Record Store in Bedford & Mario’s Hair Design in Kempston.