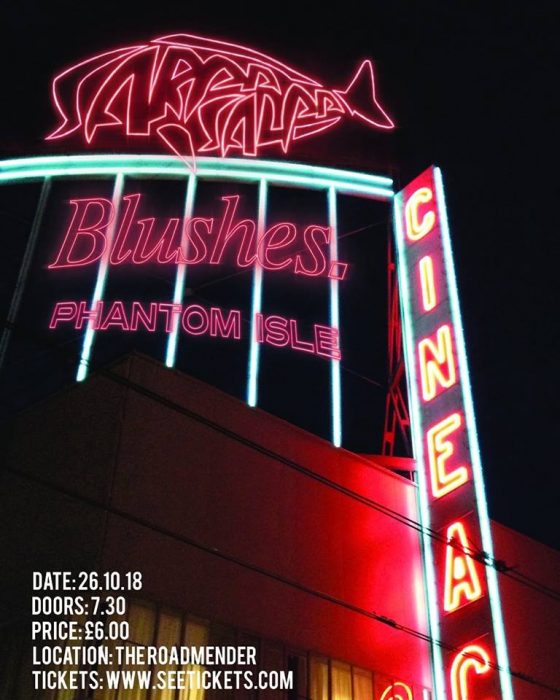 Following a non-stop year of writing, rehearsing & recording as well as playing numerous gigs & festivals up and down the UK over the summer of 2018, the Northampton based band SARPA SALPA have cemented their place as one of the hardest working bands in the UK indie scene and return to the Roadmender on the 26th October following their two previous sold out shows at the venue.

The band released their brand new single ‘Smith’ on the 14 September. Lead singer Marcus Marooth says of ‘Smith’ – it is a retrospective track which centres around the collapse of a relationship before it has even begun. The track tries to reflect the anger & sadness felt during the time. It’s a whirlwind of emotion which culminates in a storm of angular riffs and synthesisers. The new single ‘Smith’ will be released on all digital platforms with and will also be available on a limited edition red vinyl 7’’ single which will be available to purchase on the night..

BLUSHES
Indie/Rock/phunk/sadness since 2016 – “For fans of psychedelic nights in, mad nights out. It’s a concoction that slips down like a fruity cocktail on a summer’s day.” – NME

Opening up the evening will be PHANTOM ISLE

“Phantom Isle have an edge to them which is reminiscent of some the ’70s greatest pop rock groups, blending some soft vocals with heavy guitars and synths” – Bittersweet Symphonies

The two previous headline shows at the venue have sold out in advance. Tickets priced £6 are available online from the Roadmender Website & Seetickets online and from the bands in person.