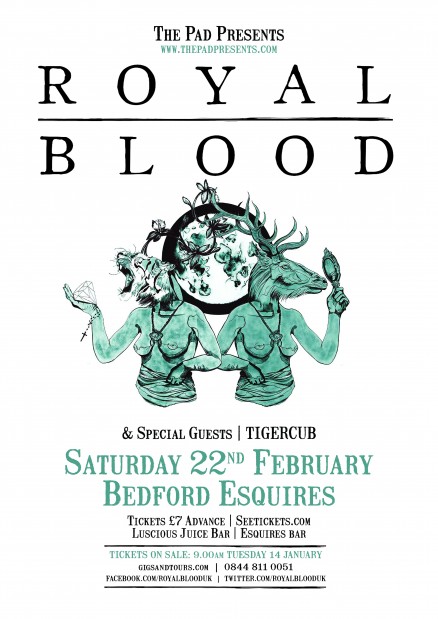 We are very pleased to announce that we will be bringing the hottest of all the hotly tipped bands to Bedford Esquires on Saturday 22nd February, when ROYAL BLOOD headline the main stage.

Back in November 2013 the band released ‘Out of the Black’, their debut single on Black Mammoth Records. It’s a single that wrings the maximum amount of noise, aggression and pure youthful exuberance out of the most minimal of ingredients, featuring nothing more than Mike Kerr’s vocals and bass and Ben Thatchers drums.

Along with getting playlisted on all major radio stations the single catapulted the band into the thoughts of the tastemakers, and they were the only guitar based band to feature on the BBC sound of 2014 long list, as well as being heralded as the top ten ones to watch in 2014 by NME, Guardian and Time Out among many others.

This is the last chance to catch Royal Blood playing these sized venues, 2014 is going to be huge for them and we expect this gig to sell out, so advance tickets highly advised.

Support on the night comes from the wondrous TIGERCUB. More on these guys to follow soon!

Available from Esquires and Luscious Juice Bar from this coming Monday.