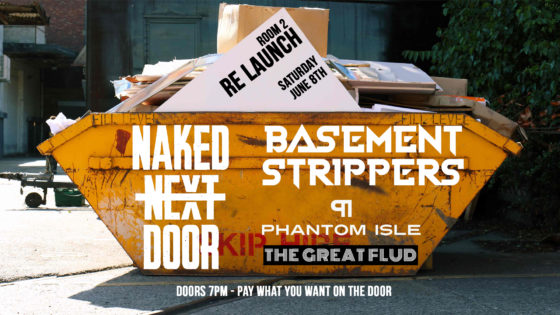 For those regular to Esquires some of you may have noticed some renovations going down over the last few weeks on the ground floor in the room often referred to latterly as Holy Moly’s or in the past ‘The Disco’ or nightclub.

Unloved for a few years now the room became the poor relation of its big brother upstairs but still hosted some great live music and club nights creating a valuable space in the venue and allowing Esquires the unique position of being able to host two live music events in the venue on any same night, quite a feat for a small town music venue.

Bringing things up to speed the room has now had a complete overhaul, more than a lick of paint! By the time all the work is done in the weeks leading up to the launch night the room will have had the stage moved, dressing rooms installed, brand new PA rig installed, new stage lighting and a general spruce up bringing the room back to life for live shows and future club nights.

With all the work taking place we thought it would be great to share the room with everyone so we have decided to give it a proper launch night with some had picked bands to showcase the new room and what it has to offer, we would love to see people coming down and checking out how it looks, how it sounds and generally showing the new space some love.

The Great Flud are a 5 piece Alt Rock band from London with some original Bedford connections bringing back the sound of the 80’s in to the modern day. Influenced by the likes of The Police to Fleetwood Mac, you will be left wanting more.
They’ve spent the last year gigging around the local London scene, having the opportunity to support Ecca Vandal and Deaf Havana at Under The Bridge, and most recently support Estrons on the main stage at the venue.
Having released their first 2 singles ‘Drive’ and ‘Don’t Ask Why’ and also releasing their debut music video, and EP is expected to be out by mid 2019. It’s safe to say The Great Flud are ready to hit you big time, making 2019 their year. You don’t want to miss it!

Basement Strippers are a 4-piece rock band from Bedford. Since forming in late 2016, the band has always taken great pride in standing out and leaving a lasting impression. Sporting smart wear on stage and bringing infectious passion and energy to their live sets, the band brings a plethora of different styles of rock, incorporating indie, alternative, punk, metal and electronic into their songs.
The real journey for Basement Strippers began with the release of their debut EP, “The Exotic Show”, in the summer of 2017. The EP’s main single, We Are Not Afraid, was featured as the end credits theme for the motion picture “Dead Squad”. Following up in 2018, the band signed to independent record label Lucky Boy Records, and released their second EP “Echo Chamber”. A collection of fierce rock anthems, Echo Chamber is an expression of people’s frustrations in all walks of life. Featuring the lead single and stomping protest song, “Blindfold”, the EP is a strong snapshot of the energy that they recreate on stage. Echo Chamber proved to be a real triumph for the band, securing them nominations for multiple local music awards for both EP of the Year and Track of the year.
With new music on the way it has been great to see this band develop over the past few months and the hard work of getting themselves out there in people’s faces and playing a lot of shows starting to pay off.

“Phantom Isle fill your ears with forceful melody, maddeningly moving and evocative, in their new tune ‘Four Walls’.
Dream pop dressed up in drama from start to finish… This song will alter your state for sure.” – Odd Nugget
“Absolutely amazing live band” – BBC Introducing in Northampton

Headlining the show are Naked Next Door. The band share the collective purpose of constructing vast sounding full-hearted songs that crackle with the electricity of youthful spirit while over flowing with earnest lyrics connecting, relating and communicating with everyone living in the day-to-day, If music is indeed the key to life then we, Naked Next Door Will become a part of your daily soundtrack!
“Naked Next Door pouring hook after hook down your neck in this mean, Lean dash of a debut” – James Cunliffe /Transmission
“Their multi-layered sound incorporates haunting hooks and catchy melodies that sweep the listener along and stay with you long after song has finished” – Pulse-Alternative Magazine
“With a strong guitar presence and lead vocal from Euan Emerton, Naked Next Door deliver a punchy introduction to their sound” – Vents Magazine

*PLEASE NOTE* The show finishes at approximately 10.30pm and the room will then reopen at 11pm for one of the legendary SILENT DISCOS in the new space.