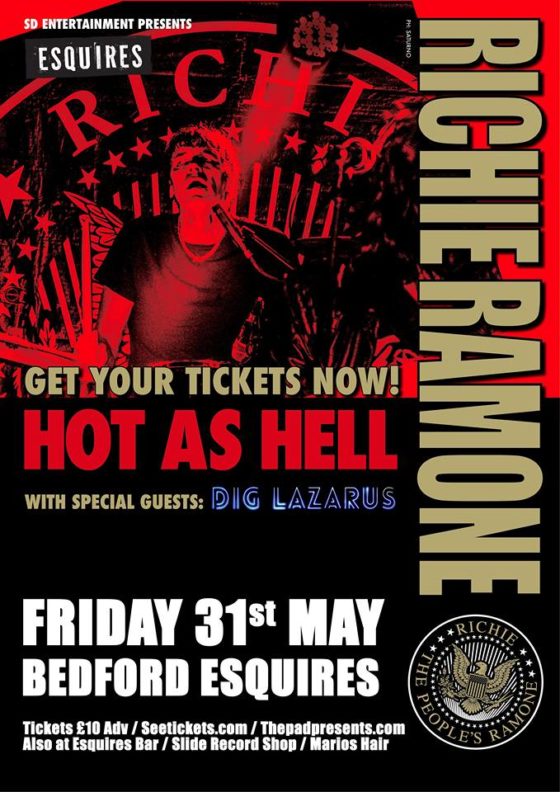 *From Richie*
“The tour is cancelled until further notice due to upcoming surgery.
We cannot reschedule at this time”

I do hope to be in a position sooner rather than later to begin
looking at a new time period but for now it is completely uncertain as
to when that will be.

Thank you all for you understand and co-operation on this matter.

Punk legend Richie Ramone is returning to Esquires in May, following his packed out debut at the venue in February 2016.

Richie Ramone is the fastest, most powerful drummer who ever played with the legendary punk rock band the Ramones.

Richie joined the Ramones in 1983 and performed with them in over 500 shows around the world. He was the only Ramones drummer to sing lead vocals and to be the sole composer of Ramones songs which appear on the albums Animal Boy, Too Tough to Die and Halfway to Sanity.

PUNK ROCK ICON JOEY RAMONE REMARKED, “RICHIE SAVED THE BAND AS FAR AS I’M CONCERNED. HE WAS THE GREATEST THING TO HAPPEN TO THE RAMONES. HE PUT THE SPIRIT BACK IN THE BAND.”

Richie’s song, Somebody Put Something in My Drink, became a fan favorite and was included on Ramones Mania, one of only two Ramones albums to go gold, as well as Loud, Fast Ramones: Their Toughest Hits, an album comprised of songs handpicked by Johnny Ramone as the Ramones’ best works.

Richie recently released the critically acclaimed single, The Last Time (a tribute to his father who passed away in 2018), following up the success of his second CD, Cellophane, (August 2017), a collectible, clear vinyl LP version, and a 7” single for the track “I Fix This.” Prior to this, Richie dropped his first solo album, Entitled, which featured new songs written by Richie as well as new recordings of the songs he wrote for the Ramones.

In November 2018, Richie released his autobiography, I Know Better Now, on Backbeat Books.