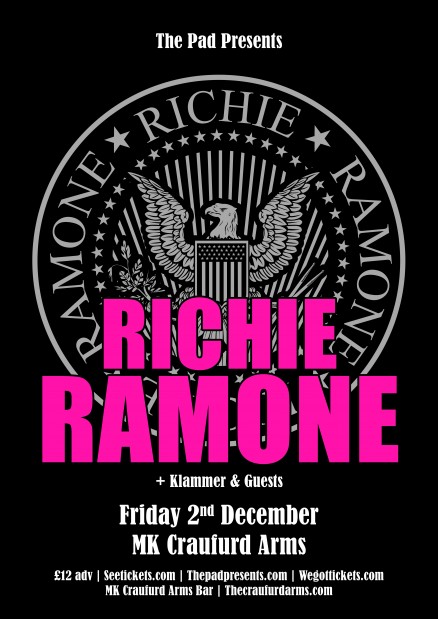 Richie Ramone (The Ramones) + Knock Off

Ramones sticksman Richie Ramone returns to the UK and Ireland for a tour kicking off in at The Camden Underworld, London on 29th November. Richie is touring in support of latest release ‘Cellophane’ which drops August 5th worldwide on DC Jam Records. Cellophane features cover of Depeche Mode’s, Enjoy Your Silence plus brand new tracks.

Richie is renowned as the fastest, most powerful drummer who ever played with the legendary punk rock band the Ramones. He joined the Ramones in 1983 and first appeared with the band on their Subterranean Jungle tour.

Richie performed in over 500 shows around the world with the Ramones and wrote several critically-acclaimed and fan-favorite songs for the albums Animal Boy, Too Tough to Die and Halfway to Sanity.  Punk rock icon, Joey Ramone, remarked that “[Richie] saved the band as far as I’m concerned. He’s the greatest thing to happen to the Ramones. He put the spirit back in the band.”

Richie is notable as the only Ramones drummer to sing lead vocals on Ramones songs, “(You) Can’t Say Anything Nice” as well as the unreleased “Elevator Operator.” Richie was also the only drummer to be the sole composer of Ramones songs including their hit “Somebody Put Something in My Drink” which remained a staple in the Ramones set list until their last show in 1996 and continues to be covered by new generations of bands worldwide.  “Somebody Put Something in My Drink” was included on “Ramones Mania,” the first Ramones album to go gold as well as “Loud, Fast Ramones: Their Toughest Hits,” an album comprised of songs hand picked by Johnny Ramone as the Ramones’ best works.  Richie also wrote “I’m Not Jesus,” “Can’t Say Anything Nice,” “I Know Better Now,” “Humankind” and “Smash You” which became the title track for one of the Ramones’ most successful re-releases, Smash You: Live ’85. Richie’s “I’m Not Jesus” took the Ramones in a heavier direction and has become a frequent cover tune for innumerable heavy metal bands.  Richie’s songwriting contributions were supported by Joey Ramone:  “I encouraged Richie to write songs . . . we never let anybody else write our songs.”

In 2007, Richie Ramone introduced his virtuosic drumming to the symphonic world with his “Suite for Drums and Orchestra” based on Leonard Bernstein’s West Side Story. He debuted his arrangement with the Pasadena Pops Orchestra as the featured drum soloist and was an immediate hit with critics and patrons there and in other cities. He is currently working on another innovative “Suite for Drums and Orchestra” comprised of classic James Bond movie songs.

In 2011, the Recording Academy gave the Ramones a Grammy Lifetime Achievement Award in Los Angeles, where all three of the band’s drummers (Tommy, Marky and Richie Ramone) stood beneath the same roof for the first time ever.  In 2012, Richie was the only surviving Ramone featured on the second Joey Ramone solo album, “Ya Know?”  On October 8, 2013, Richie released his first solo album, “Entitled,” which features new songs written by Richie as well as new recordings of songs he wrote for the Ramones.  Billboard notes, “Richie’s 12 freshest cuts aim to please fans of both rock and metal with its blend of power chord-chugging simplicity and guitar hero virtuosity.”

Support comes from  Knock Off.

Formed in sept 2013, KNOCK OFF are a hard hitting punk trio, taking influences from the early 80’s U.K punk scene. 30 years on and the country’s still a mess. KNOCK OFF’s sound is fuelled by anger and disillusionment at a country going down the pan and life in general. A raw and powerful sound mixed with anger, energy and passion, with stick in your head choruses, KNOCK OFF will leave their mark. With 2 albums under their belts, both receiving great reviews in Vive Le Rock magazine and a Single to be launched through Human Punk Records KNOCK OFF are aiming to be heard. A KNOCK OFF gig can be described as an onslaught of energy, with hard and fast songs alongside anthems with stick in your head choruses. With supports with many big names such as The Buzzcocks, Sham 69, The Business, Old Firm Casuals and The U.K.Subs, Knock Off are becoming regulars on the festival scene, packing out the Arena stage at Rebellion 2 years running. Jump on the bandwagon, before someone nicks the wheels…

Tickets for Richie Ramone with his band go are on sale  from Seetickets and the venues website priced £12 in advance –  for further details and be sure to check in with Richie on his Facebook & Twitter feeds.