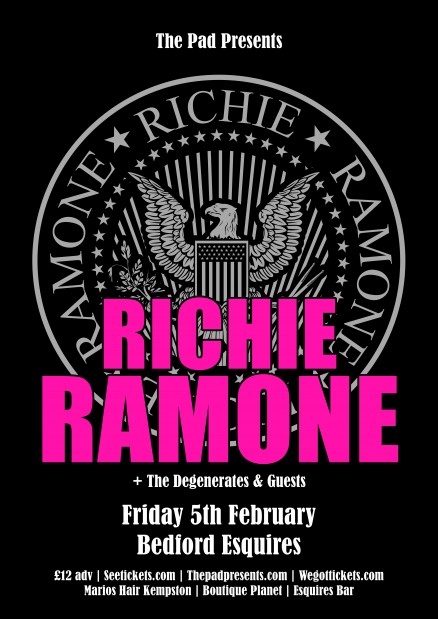 The Pad Presents in association with SD Entertainment presents’

Richie Ramone is the fastest, most powerful drummer who ever played with the legendary punk rock band the Ramones.  He joined the Ramones in 1983 and first appeared with the band on their Subterranean Jungle tour.

Richie performed in over 500 shows around the world with the Ramones and wrote several critically-acclaimed and fan-favuorite songs for the albums Animal Boy, Too Tough to Die and Halfway to Sanity.  Punk rock icon, Joey Ramone, remarked that “[Richie] saved the band as far as I’m concerned. He’s the greatest thing to happen to the Ramones. He put the spirit back in the band.”

Richie is notable as the only Ramones drummer to sing lead vocals on Ramones songs, “(You) Can’t Say Anything Nice” as well as the unreleased “Elevator Operator.” Richie was also the only drummer to be the sole composer of Ramones songs including their hit “Somebody Put Something in My Drink” which remained a staple in the Ramones set list until their last show in 1996 and continues to be covered by new generations of bands worldwide.  “Somebody Put Something in My Drink” was included on “Ramones Mania,” the first Ramones album to go gold as well as “Loud, Fast Ramones: Their Toughest Hits,” an album comprised of songs hand picked by Johnny Ramone as the Ramones’ best works.  Richie also wrote “I’m Not Jesus,” “Can’t Say Anything Nice,” “I Know Better Now,” “Humankind” and “Smash You” which became the title track for one of the Ramones’ most successful re-releases, Smash You: Live ’85. Richie’s “I’m Not Jesus” took the Ramones in a heavier direction and has become a frequent cover tune for innumerable heavy metal bands.  Richie’s songwriting contributions were supported by Joey Ramone:  “I encouraged Richie to write songs . . . we never let anybody else write our songs.”

In 2007, Richie Ramone introduced his virtuosic drumming to the symphonic world with his “Suite for Drums and Orchestra” based on Leonard Bernstein’s West Side Story. He debuted his arrangement with the Pasadena Pops Orchestra as the featured drum soloist and was an immediate hit with critics and patrons there and in other cities. He is currently working on another innovative “Suite for Drums and Orchestra” comprised of classic James Bond movie songs.

In 2011, the Recording Academy gave the Ramones a Grammy Lifetime Achievement Award in Los Angeles, where all three of the band’s drummers (Tommy, Marky and Richie Ramone) stood beneath the same roof for the first time ever.  In 2012, Richie was the only surviving Ramone featured on the second Joey Ramone solo album, “Ya Know?”  On October 8, 2013, Richie released his first solo album, “Entitled,” which features new songs written by Richie as well as new recordings of songs he wrote for the Ramones.  Billboard notes, “Richie’s 12 freshest cuts aim to please fans of both rock and metal with its blend of power chord-chugging simplicity and guitar hero virtuosity.”

A Richie Ramone show features a mixture of solo tracks and plenty of Ramones classic anthems. Ritchies band features members of Anti Product and Clam Abuse who used to pack Esquires out in their own right as well as Claire Misstake from all girl band tribute The Ramonas.

This is a rare chance to see a living Ramone on your doorstep and having caught the live show earlier in 2015 has the makings of a classic night at Bedford Esquires.

Opening up the show is The Degenerates with further guest support to be confirmed with Klammer filling the middle slot.

Tickets on sale through priced £12 and can be bought in person from Esquires Bar & Boutique Planet in Bedford and Mario’s hair Design in Kempston form the 21st November and are available online from Seetickets from the 18th November.