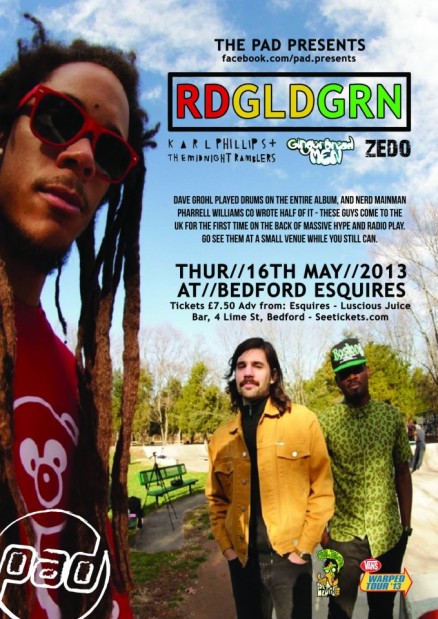 We’re super stoked that we managed to get these guys, not only did the Legend Dave Grohl play drums on the entire album, recorded at Sound City Studios, but NERD’s Pharrell Williams liked them so much he co wrote part of the album too.

Famous admirers apart, within 3 weeks of uploading debut single ‘I Love Lamp’ on YouTube, it had hit over 400,000 hits and had been featured as the most requested track on MTV – The first time ever for a new artist.

These guys broke out from the Washington DC scene with their their highly stylized sound (that Go Go drum beat- a distinct DC rhythm) that takes hiphop infused punk and indie rock to create something refreshingly unique.

Comprised of three members who identify as Red, Gold, and Green, RDGLDGRN began making music in their basement studio, drawing from a vast and almost ironically diverse pool of influences like Chuck Brown, Vampire Weekend, Outkast, The Neptunes, and Bad Brains. What many might consider a wildly ambitious, even impossible task to pull off, RDGLDGRN managed to effortlessly combine genres of music to create something new, something all their own, and something that has the music industry buzzing with excitement.

Playing only a select handful of showcase UK dates before setting off on the acclaimed Vans Warped Tour in June 2013, this is a chance to see the band before they hit much, much bigger stages.

Main support comes from Karl Phillips & The Midnight Ramblers, one of the finest Live bands around these parts and a perfect accompaniment for RDGLDGRN. Last year this band released a critically acclaimed debut album and shared stages with the likes of Chase and Status, Example and Skepta – Just don’t call them a crossover band.

Also on the night comes from unorthodox white rappers GINGERBREAD MEN, a hip hop duo hailing from Bedford who have released a steady stream of high quality mixtapes over the last year or so.

Special guest for the evening is a 15 minute showcase from one of our favourite MCs ZEDO, who has released some solid tracks of late as well as playing around the country as The Wholls main man MC

More guests to be confirmed.