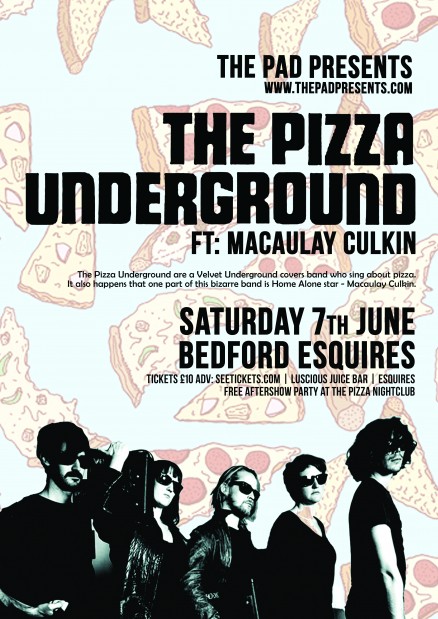 *DUE TO THE BAND CANCELLING TH UK TOUR DATES THIS SHOW IS NOT HAPPENING, PLEASE OBTAIN A REFUND FROM THE POINT OF PURCHASE*

This is possibly one of the strangest gigs we’ll ever put on, but ask yourself three simple questions..

If the answer to all three is YES, then you my friend are in serious luck!

We are very pleased to announce that we will be bringing The Pizza Underground to Bedford as part of their first ever UK tour, and we are one of the only regional dates too.

It could have been a frivolous, flash in the pan tribute to the late Lou Reed, but Macauly Culkin’s pizza based Velvet Underground comedy tribute act, Pizza Underground, continue to deliver in 2014.

The collective have formed from the crusts of New York’s anti-folk scene, its members including the Home Alone actor alongside Matt Colbourn, Phoebe Kreutz, Deenah Vollmer and Austin Kilham.

Expect such hits as All the Pizza Parties (All Tomorrow’s Parties), Pizza Gal (Femme Fatale) and Take a Bite of the Wild Slice (Walk on the Wild Side); beats courtesy of take-away boxes.

The group got together in February 2012 and have performed a string of gigs so far, including Comic Arts Brooklyn and at a Lou Reed tribute show at anti-folk landmark the Sidewalk Cafe.

Rest assured, this gig will be a talking point for many years to come!